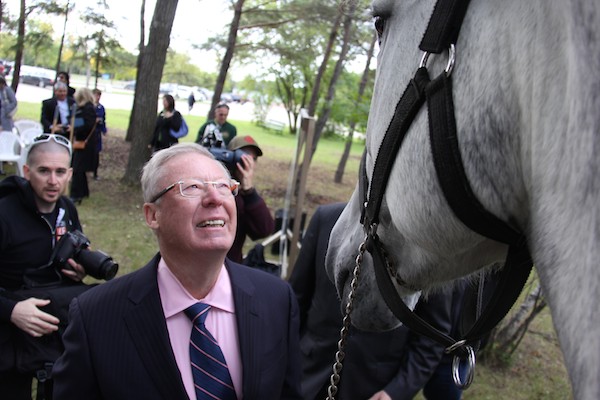 Former Great-West Life chairman and CEO Ray McFeetors looks up at Ice, a six-year-old Silver Dapple Percheron, one of the heavy horse breeds that will live at Assiniboine Park Zoo’s McFeetors Heavy Horse Centre when it opens next summer. (SHANE GIBSON / METRO WINNIPEG)

Two large donations to the Assiniboine Park Conservancy are paving the way for a new heavy horse exhibit.

A $2 million donation by Ray McFeetors, former CEO and Chairman of Great-West Life, was announced on Wednesday, along with an additional $250,000 from Great-West Life itself.

“The McFeetors Heavy Horse Centre concept grew from the larger vision for Assiniboine Park Zoo that is focussed on highlighting Manitoba wildlife, geography, and culture,” said Margaret Redmond, president and CEO of the Assiniboine Park Conservancy.

The centre is expected to open by summer 2015. It will be located in a 4.7 acre area at the north end of the zoo and include a barn, pastures, paddocks, a carriage shed, and walking paths.