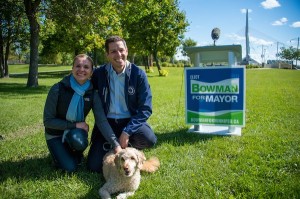 Bowman said on Friday his plan would include establishing a community centre in the new Railside Lands and Parcel 4 development by working with The Forks.

“I want more people living in downtown but to do that we must make downtown a place where residents can grocery shop, let their children play sports and take their dog to a safe off-leash dog park,” Bowman said.

“Whether a young family, senior or middle aged you should feel like downtown living is an option and the only way to do that is to create a neighbourhood atmosphere like any other in Winnipeg.”