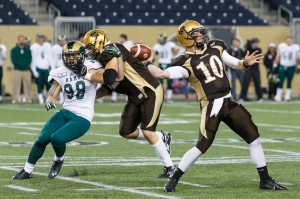 WINNIPEG — The Manitoba Bisons needed an early season comeback and they pulled off a huge one Friday night at Investors Group Field.

The Herd (1-1) found redemption against the Regina Rams 42-18 in front of 6,435 fans in their first regular season game at home.

The Bisons had built a comfortable 27-2 lead at the half to seemingly run away with the victory early on, allowing the Rams to rack 16 more points before it was all over.

“It was certain plays as much as anything that sparked us, and then once that happened it became three units — special teams, offence and defence were pretty much on sync,” Bisons head coach Brian Dobie said.

Manitoba led the scoring through the three-and-a-half hours of play with quarterback Jordan Yantz at the helm — rushing for two touchdowns and passing for another two.

Yantz was also the top passer of the night with 206 yards on 11-23 with two TD strikes to slotback Nic Demski and Kienan LaFrance, while also rushing for 53 yards and TDs scores of four and eight yards.

Manitoba hosts UBC next Saturday at 2 p.m. in the homecoming game.