King of the Cage Thrills More Than 1,200 Fans 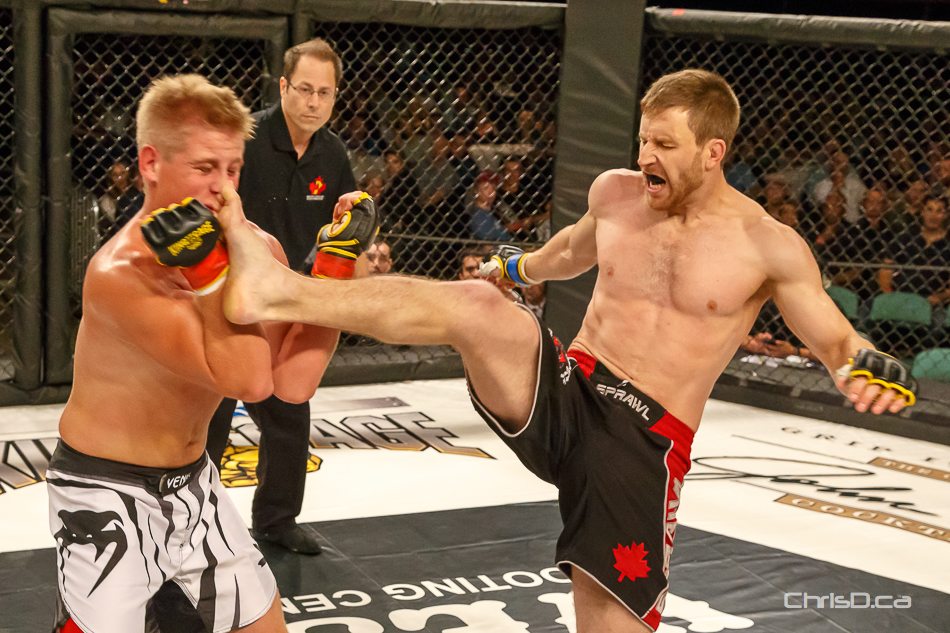 Ivan James (right) kicks Damian Johnston in the face at the King of the Cage event at the RBC Convention Centre on Friday, September 19, 2014. (SHAWN COATES / CHRISD.CA)

WINNIPEG — King of the Cage, an international mixed martial arts company that has produced more than 600 shows in North America, made its Winnipeg debut Friday night at the RBC Convention Centre.

The event featured seven bouts of mostly Manitoba fighters before a crowd of more than 1,200 people.

In the other feature bout of the night, Jarod Milko (9-3) handed fellow Winnipegger Vyron Phillips (3-1) his first career defeat in the evening’s most controversial fight.

Milko won by split decision, much to the displeasure of a loudly booing crowd. Phillips finished each round with a flurry of punches that thrilled the audience and seemed to give him the advantage before the final decision was rendered.

The fight of the night was the heavyweight tussle between Jared Henderson (2-0) and Steve Roy (0-1). Roy dominated the first round with several knee and elbow strikes. Henderson used a series of devastating right-hand strikes to own the second round before winning the fight in the third, courtesy of repeated left and right uppercuts.

What was likely to be an interesting fight featuring Pinawa’s Robin Black, was cancelled before the night’s action began.

A 45-year-old athlete who began his MMA career at 39 and who had planned to retire after tonight’s fight, Black (4-5) was scheduled to face Adam Bodwell (2-4). However, Bodwell failed to make the flight to Winnipeg, hence the cancellation. It is not known if Black will have a farewell fight at some other time.

More than eight-million viewers in the United States saw the night’s action via MAV-TV.

KING OF THE CAGE RESULTS: