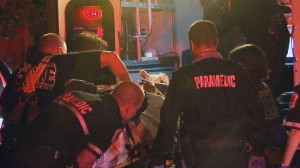 A woman is placed into an ambulance after being seriously assaulted in a suite on Hill Street early Saturday, September 20, 2014. She succumbed to her injuries in hospital. (SHAUN MCLEOD / FOR CHRISD.CA)

Charges are pending against a 25-year-old man after a woman seriously injured early Saturday morning died in hospital.

Winnipeg police were called to the first 100 block of Hill Street at around 5 a.m. for a female needing assistance.

Police made contact with a male suspect, who allegedly injured an officer in the process. He was eventually apprehended and placed under arrest.

Police found the woman in a lower level suite with serious upper body injuries. She was taken to hospital in critical condition and later pronounced deceased.

Members of the homicide unit continue to investigate and autopsy results are pending.

The 25-year-old suspect remains in custody.