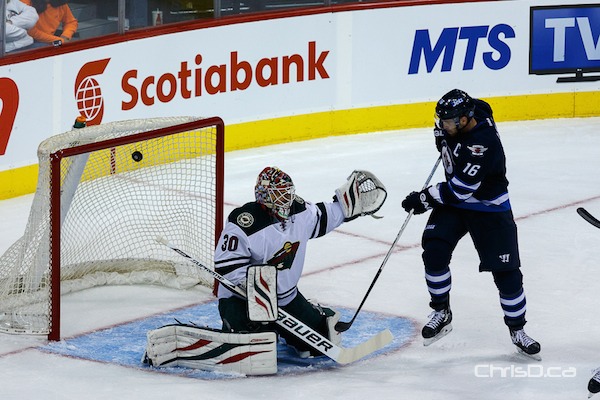 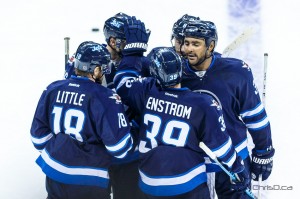 WINNIPEG — The Winnipeg Jets got their fourth season back in the Manitoba capital rolling Monday night with a 2-1 pre-season win over the Minnesota Wild in front of a somewhat spotty MTS Centre crowd.

As will likely be the case in all six of Winnipeg’s remaining exhibition games before the regular season begins on October 9 in Arizona, Monday’s matchup against a rookie-laden Wild roster was a chance to get a look at some of their own prospects working to make the big club, including Adam Lowry, Josh Morrissey, Nic Petan, Brendan Kitchton, and 2014 first-round draft pick Nik Ehlers.

“I had butterflies when I went on the ice,” said Ehlers of his first game in the pros. “When the crowd went crazy out there it was amazing. I think the game went pretty well. It’s the NHL — it’s different.”

“Obviously they’re a lot bigger than the junior leagues,” continued the 5-foot-11, 165-pound offensively-gifted 18-year-old. “You don’t have as much time as you do in junior and it’s tough… It was my first game. I have to get used to it, but I felt pretty good out there and had some good plays.”

Forward Dustin Byfuglien, who lines up on defence on the Jets top power-play unit, found the back of the net on a point shot at 14:15 of the second period to give Winnipeg a 1-0 lead, with assists going to Tobias Enstrom and captain Andrew Ladd.

Bryan Little made it 2-0 Winnipeg early in the third, burying his own net-side rebound after a feed from Michael Frolik on the rush. The secondary assist capped Ladd’s two-point night.

Goaltender Michael Hutchinson — fresh off inking a new two-year, $1.15-million contract on July 2 — came into the game midway through the second in relief of starter Ondrej Pavelec who stopped all 14 shots he faced. Hutchinson, 24, who is expected to serve as the No. 2 netminder this season, looked solid making some strong saves while letting a late one in from Minnesota’s Tyler Graovac with just 14 seconds remaining.

“It’s a long time off from being in game situations and dealing with a lot of traffic and other things you can practice but you don’t really see them (until) the game. But it was nice to get back into it,” said Hutchinson following his 12-save performance. “It’s a totally different feeling. Last year was my first (training) camp with Winnipeg and I just tried to come in and make a good first impression.”

“This year is totally different mentality. You’re coming in to make the team and contribute to the team.”

Winnipeg continues their preseason schedule Wednesday night as they host the Edmonton Oilers.