Former CEO of The Forks to Meet with Winnipeg Chamber 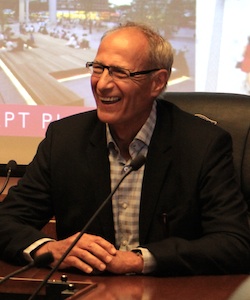 The former CEO of The Forks North Portage Partnership will address the city’s business leaders on Wednesday.

Jim August will speak to members of the Winnipeg Chamber of Commerce during a luncheon at the Delta Winnipeg Hotel.

His speech, entitled “The Forks at 25 years — Looking Back and Moving Forward in Downtown Winnipeg,” will reflect on 14 years as CEO, and his role in laying the groundwork for the future. He will also discuss his views on the evolution of Winnipeg’s downtown.

Prior to heading up The Forks, August led the Core Area Initiative as well as a private consultant working on downtown projects.

The members luncheon begins at noon with August taking to the mic at 12:45 p.m.