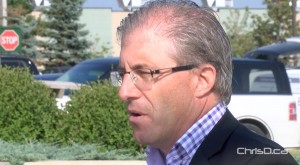 The mayoral candidate said he would bring back a secretariat position for the executive policy committee to review all reports before the committee sees them. Steeves says since the secretariat was disbanded, political influence could be directed at administration before reports were presented to the EPC.

The position would allow safeguards to be put into place and ensure the political process is properly implemented when reports are being drafted and developed.

The same safeguard would apply if interested parties outside of the city government were contacted in any way during the preparation of reports for EPC, Steeves added.