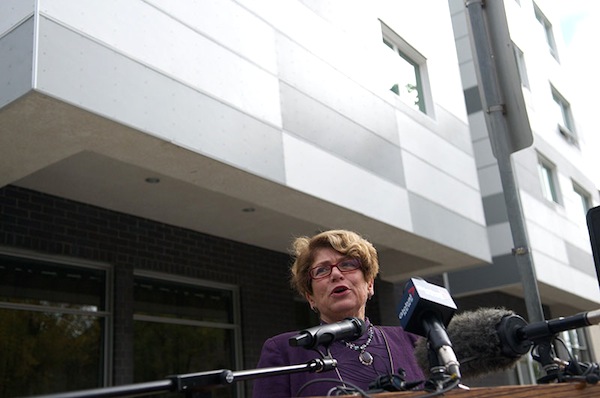 Speaking outside of Living Gospel Church on William Avenue, Wasylycia-Leis said she would expand the use of tax increment financing, while using inclusionary zoning policies and buy out options.

“Our plan will enable the private and not-for-profit sectors and other levels of government to leverage more value for their investments,” she said. “Together we can improve access to affordable and social housing while taking on more complex issues such as homelessness.”

The former NDP MP would also prioritize land for affordable housing, including pre-zoning when land is available, donate land for housing, and provide waivers of development fees for new housing development.

“We need to take an active role in developing policies that give households of all income levels a variety of options. Other cities across Canada such as Calgary, Vancouver, Edmonton, Regina and Saskatoon have well developed action plans,” Wasylycia-Leis added. “It is time for Winnipeg to catch up with other western Canadian cities.”

The plan will complement the province’s plan to build another 500 affordable and 500 social housing units over the next three years, and address issues of homelessness in the city.