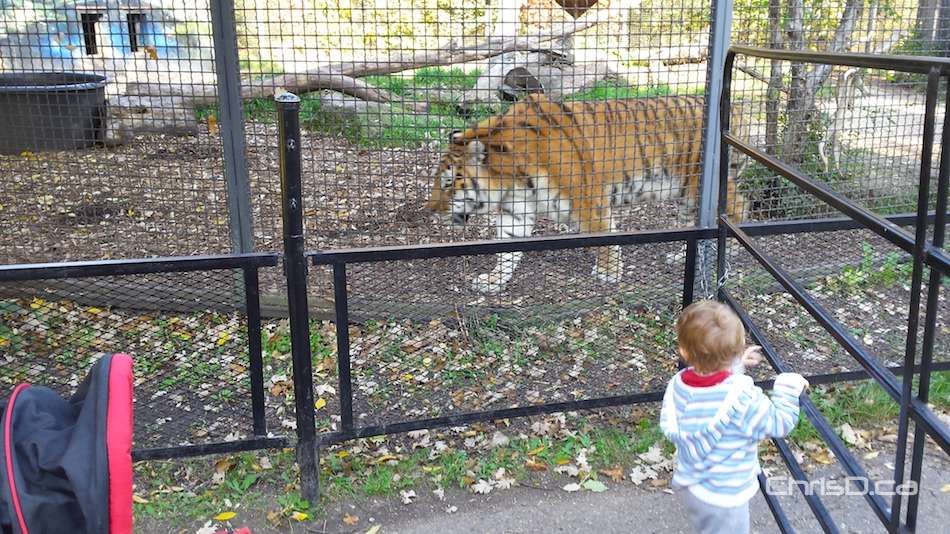 Marcel Burnett, 2, plays in front of the tiger enclosure roughly 15 minutes before Baikal (in the background) was killed by another tiger at Assiniboine Park Zoo on Thursday, September 25, 2014. (ROBERT BURNETT / SUBMITTED)

Two Amur tiger cubs come out of their den to show off for the public at Assiniboine Park Zoo on Monday, October 3, 2011. (JENNA CUMBERS / METRO WINNIPEG FILE)

WINNIPEG — One of Assiniboine Park Zoo’s Amur tigers died on Thursday morning after being attacked by another.

Zoo officials say Baikal was able to gain entry to a neighbouring tiger enclosure after the gate separating the animals was left unlocked. A young male tiger, Vasili, attacked him during a confrontation. The enclosure was also housing another tiger, Samkha, at the time.

Officials say at no time was the public in any danger due to another internal gate separating the animals from visitors.

Robert Burnett was visiting the zoo with his family when the attack occurred.

“It all appeared as though something significant had happened,” he said, noting there was loud rattling sounds coming from the cage. “They (zoo staff) stopped allowing access to the displays citing ‘medical procedures.'”

The zoo is conducting a full review of the incident to ensure a similar incident doesn’t occur in the future.

The two younger tigers arrived in Winnipeg in 2011 from the Calgary Zoo.