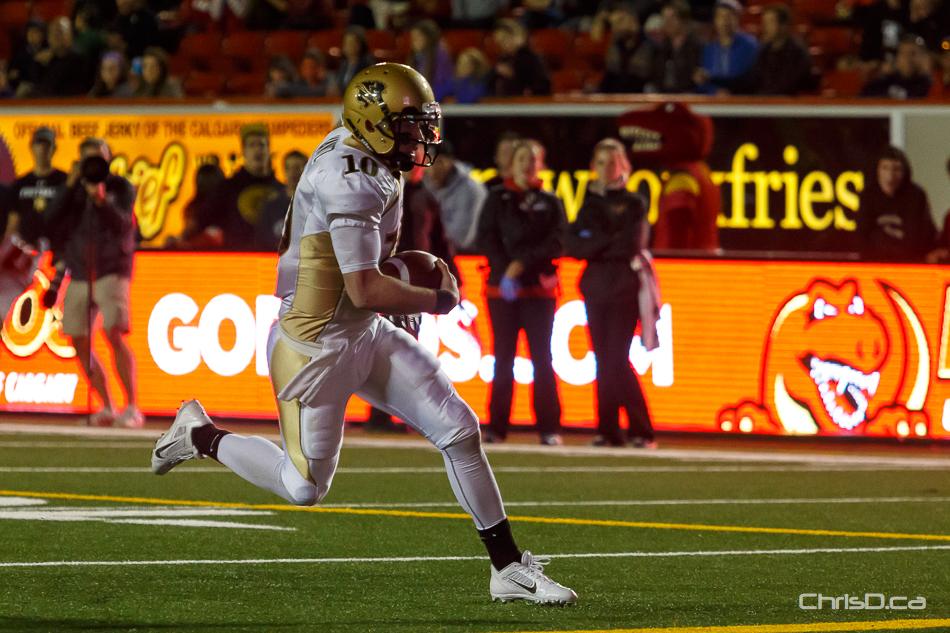 U of M Bisons quarterback Jordan Yantz delivers a touchdown in game action against the Calgary Dinos on Friday, September 26, 2014. (SHAWN COATES / CHRISD.CA) 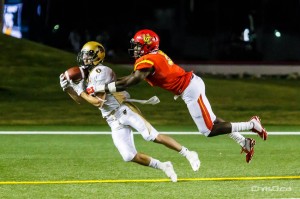 CALGARY — The Manitoba Bisons missed a field goal attempt on the last play of the game to fall 42-41 to the Calgary Dinos in a thrilling contest Friday night at McMahon Stadium.

The No. 10-ranked Bisons played well against the No.2-rated Dinos, matching the red-and-yellow score for score before an announced crowd of about 1,783 fans. The Bisons amassed 506 yards in total offence compared to the Dinos 499.

“This was just an absolute heartbreaker,” said an emotional Bison head coach Brian Dobie seconds after the conclusion of the game. “We had the game won. It was ours to win and we just didn’t do it.”

Manitoba quarterback Jordan Yantz was 26-of-45 for 426 yards, four touchdowns and zero interceptions. He also ran for a major. Teammate Kienan LaFrance had another outstanding game, rushing 15 times for 92 yards and a TD. He added three catches for 67 yards and another score. 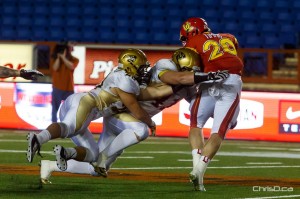 “We proved today that we can play with the No. 2 team in the country,” said Dobie. “I’m absolutely proud of our guys.”

Alex Vitt had seven receptions for 123 yards and a TD, Dustin Pedersen had seven catches for 103 yards and Matt Sawyer had five grabs for 71 yards and two scores.

Several Bisons were injured during the contest including all-star defensive end Evan Gill. Despite the losses to the roster, the Herd never let down.

“I have huge concerns about the injuries,” said Dobie. “These guys fought hard, especially because of the injuries. That’s why I’m so proud of them.”

The Bisons’ record in the Canada West Conference record is now 2-2 while the Dinos are now 4-0.

The Bisons play another road contest when they face the Alberta Golden Bears Saturday, Octobert 4 at Foote Field. That same day, the Dinos will play host to the Regina Rams at McMahon Stadium.