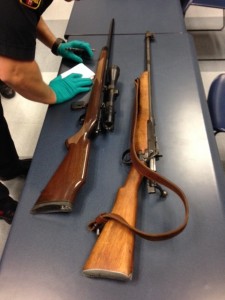 Weapons seized from a home on Ferndale Avenue on Sunday, September 28, 2014. (WPS / HANDOUT)

Weapons charges have been laid against a 21-year-old man after Winnipeg police seized several weapons on Sunday.

Police executed a search warrant at a home in the 200 block of Ferndale Avenue.

Joran Christopher Anderson has been charged with numerous weapons, theft and property-related offences.

He remains in police custody.