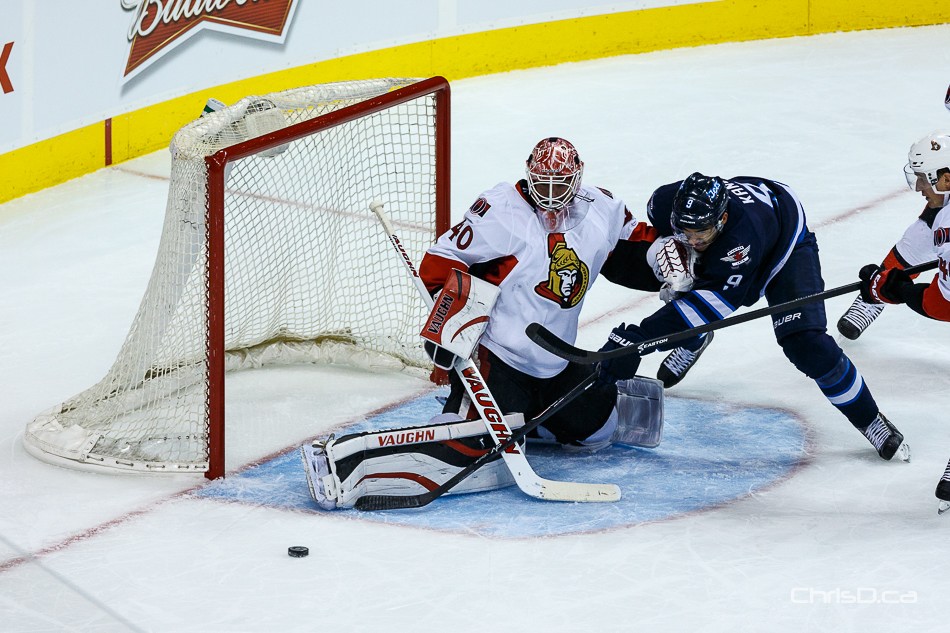 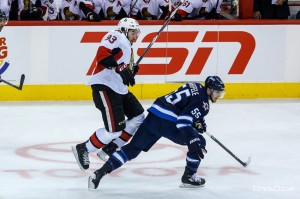 For Winnipeg, the game-winner was provided by 18-year-old Nik Ehlers, who got his first pre-season goal at 6:22 in the second period, on the receiving end of a beautiful cycle from fellow young guns Matt Halischuk and Nicolas Petan.

“It felt pretty good. I got the puck, put it in, and I had no idea how to celebrate,” said Ehlers. “I was just standing there and I was happy to score. It was amazing.”

“Those (young players) put so much stock in their offence. Most of them post huge numbers heading in, so that’s how they view themselves as hockey players,” said Jets head coach Paul Maurice. 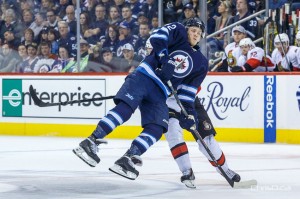 “To get their first goal and get some confidence, they get to relax a bit.”

Winnipeg got their other goal from the other end of the age spectrum, as 31-year-old Jim Slater put a savvy wrist shot in to open the scoring at 9:17 in the first. Slater started at centre and put a hard game in on the boards, making solid defensive plays throughout the night.

“Jim Slater’s line was the poster child for where we want to take our offensive game. Normally, you’re not talking about those guys in that fashion,” said Maurice. “But we’re big and we’re fast and we should be able to control pucks in the offensive zone.”

The win moves Winnipeg to 2-3 in the pre-season, while Ottawa falls to the same mark.

That one 5-on-5 goal was Ottawa’s lone goal, which came from prospect Buddy Robinson, whose catchy name is only surpassed by the move he made to score; catching the Jets on a slow change, he made a quick left-right move on Pavelec to get an open net.

Ottawa started backup Robin Lehner in goal, but changed to starter Craig Anderson after the first period. Both goaltenders let in a goal, Lehner on 13 shots, Anderson on 11. The Senators started the game without much lustre, but a furious third period, including a dramatic 6-on-4 advantage in the final minute, ended up giving them the overall shot advantage.

The Jets now play a home-and-home against the Flames to finish their pre-season schedule, in Calgary on Thursday and back at MTS Centre on Saturday. Winnipeg’s regular season begins in Phoenix against the redubbed Arizona Coyotes on October 9.