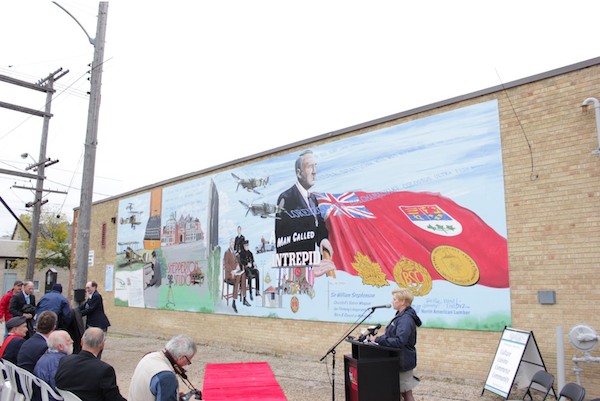 A mural honouring a fascinating Winnipeg fighter pilot, entrepreneur, industrialist has been unveiled in the West End.

Sir William Stephenson was born and raised in the city and lived for a time on Ingersoll Street. He was also an inventor, spy and advisor to President Roosevelt and Winston Churchill as part of his historic significance.

The “A Man Called Intrepid” mural dedicated to Stephenson was revealed Wednesday at Royal Canadian Legion #1 Sargent and McGee as part of the West End outdoor gallery.

“The Sir William Stephenson story is fascinating and the mural is a wonderful way to share this important history,” said West End BIZ executive director Gloria Cardwell-Hoeppner. “The many elements in the mural refer to key points in his life. We think he would love it and the surprise bit of fun we brought into the reveal.”

The mural was designed and painted by Winnipeg artist Dave Carty.

← Previous: Manitoba Musicians to Benefit from $462K Growth Project Next: Fire at School in The Pas Deemed to Be Arson →
Tags: Winnipeg