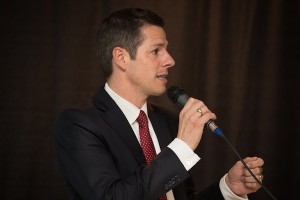 Bowman on Thursday said nearly half of the 240 km of waterfront property running through Winnipeg is city-owned. He would like to see more infrastructure and river paths in those areas, increasing use of the rivers for activities such as canoeing and kayaking.

“The rivers that run through our city are our greatest assets, symbols of our city, its history and cultural heritage. I think they should play a key role in our future too,” said Bowman.

The privacy lawyer would also like to grow the South Point Douglas community and work with the province to control river levels.

Bowman would also mandate a thorough review of the city’s Our Winnipeg plan to ensure it’s being followed for all development plans as well as opening the plan every two to four years to look at possible amendments to reflect modern realities.

“The city has put a lot of time and energy into developing plans like “Our Winnipeg”, but when it comes to implementing it that’s when city hall falls short of delivering on any meaningful plan to properly grow our city.”