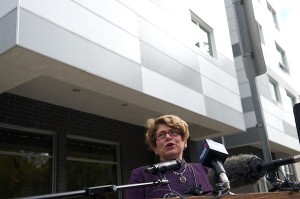 While standing on a bike path at the corner of Sterling Lyon Parkway and Shaftesbury Boulevard on Thursday, Wasylycia-Leis said the improvements would be made over the next four years. Funding would come from the $400 million plan to fix the city’s roads.

“When people walk and cycle to their destination they make themselves healthier and reduce wear and tear on our infrastructure,” said Wasylycia-Leis. “Active transportation is healthy for our citizens and our city.”

The former NDP MP would also ensure new construction has an active transportation component incorporated, prioritize snow-clearing of sidewalks to get people moving year-round, and accommodate cyclists, pedestrians and wheelchair users with more time to cross streets at intersections.