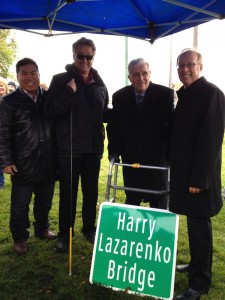 Dignitaries mark the renaming of the Redwood Bridge in honour of former city councillor Harry Lazarenko on Friday, October 3, 2014. (OFFICE OF THE MAYOR)

A bridge renamed after a former Winnipeg city councillor was unveiled on Friday.

The Harry Lazarenko Bridge, as it will now be known, is the former Redwood Bridge on Redwood Avenue that connects the North End and Elmwood.

“Harry Lazarenko spent three decades dedicated to the people of the city’s North End and just as long ensuring we protect our city’s riverbanks, so this location is a truly fitting location to honour him for his exceptional length of public service to Winnipeg,” said Mayor Sam Katz.

The motion to rename the bridge was put forward by Mynarski Councillor Ross Eadie.

← Previous: Teens Charged in Arson to School in The Pas Next: Canadian Wheat Board Building Grain Facility in St. Adolphe →
Tags: City of Winnipeg