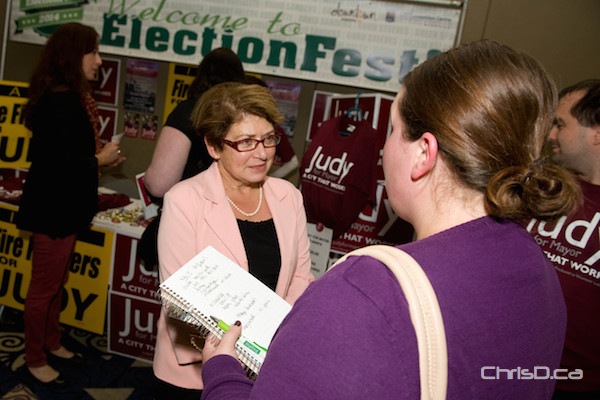 Judy Wasylycia-Leis is leading the pack ahead of six other candidates vying to be Winnipeg’s next mayor.

A new Probe Research poll (PDF) commissioned by the Winnipeg Free Press and CTV Winnipeg show the former NDP MP with 41 percent of the vote among those already decided.

Wasylycia-Leis was also leading in August when a ChrisD.ca poll conducted by Forum Research had her at 21 percent.

Probe president Scott McKay said Wasylycia-Leis is “strong city-wide and across all neighbourhoods,” including in all demographics: varying age groups, education level, and income levels, expect for those who earn more than $100,000. The latter still has her statistically even with Bowman.

Probe conducted the random and representative telephone survey of 602 adults between September 18 and October 1. The margin of error is plus or minus four per cent, 19 times out of 20.