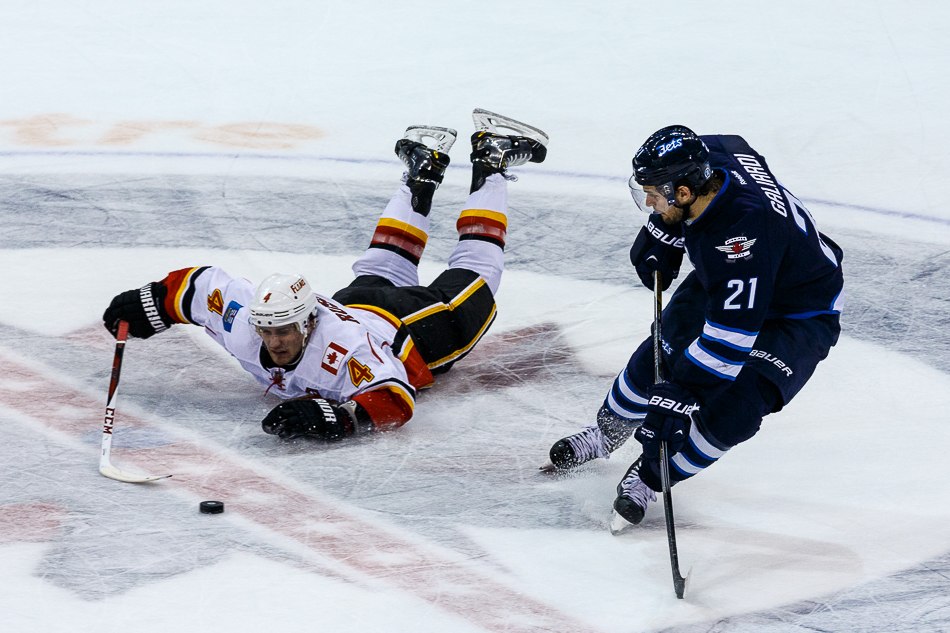 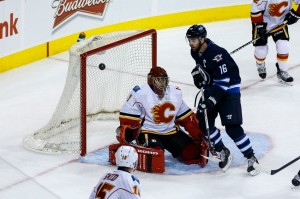 WINNIPEG — Three key pieces to the Winnipeg Jets’ puzzle each lit the lamp in the club’s pre-season finale Saturday night to douse the Calgary Flames 4-1 at MTS Centre.

“I think we simplified things and created some scoring chances,” said Evander Kane, whose quick give-and-go with newly-anointed linemate Mark Scheifele early in the third added the insurance to Jacob Trouba‘s game-winning point blast 4:30 into the second period. “We talked about it and we just wanted to simplify it and have more of a shoot-first mentality, especially at the start of the game and other things would open up as the game went on — that’s what happened.”

Calgary struck first midway through the opening frame as David Jones picked defenceman Grant Clitsome‘s pocket and caught a sleepy Ondrej Pavelec away from his post, making it 1-0 on an easy bury into the open cage. 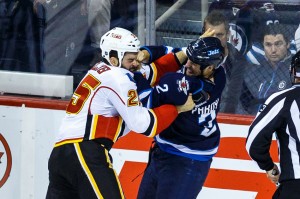 Blake Wheeler — the Jets’ near-perennial leading-scorer — who flanks Kane and Scheifele on Winnipeg’s top forward line, notched his first of the pre-season on a well-positioned net-front deflection on the power play to tie the game 1-1.

“We’re a big, powerful line and we need to approach the game that way and play the game that way,” said Wheeler of his trio with Kane and Scheifele. “(Playing in front of the net) was a part of my game that definitely picked up last year and I think it showed in the results by getting some goals in front of the net. Whether it’s tips or rebounds. A guy with my size, that’s where I need to be. I need to be in those areas. I think it’s a great spot for me on the power play.”

Bryan Little found an empty net shorthanded inside the game’s final two minutes to make it 4-1, while Pavelec earned the win with 17 saves on 18 shots.

“We talked about it before the game. This is basically going to be our roster going into the season,” said defenceman Paul Postma, whose point-shot was deflected by Wheeler to tie the game. “We got to show the fans what we’re made of. Going into this season we need a little momentum, so no better way to do it than with a big win tonight.”

The game was a penalty party, with seven first-period penalties called that set the tone on the way to a total of 19 infractions, including ten-minute misconducts to Winnipeg’s Grant Clitsome and Calgary’s Mikael Backlund in a scrappy third period.

Tempers escalated when Jets defenceman Toby Enstrom was pushed from behind and into the end boards late in the game by Calgary’s Backlund.

After just one win in the pre-season last year, the Jets finish 3-4 and get the 2014-15 regular season rolling with three road games in Arizona, San Jose, and Los Angeles beginning Thursday, October 9. Winnipeg’s home opener at MTS Centre goes Friday, October 17 against the division-rival Nashville Predators.