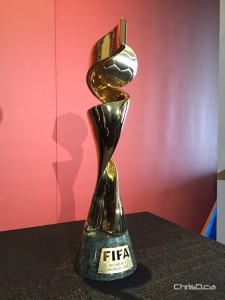 Officials from FIFA were in Winnipeg over the weekend to give Investors Group Field the once-over ahead of next year’s FIFA Women’s World Cup Canada 2015.

Winnipeg will host a series of matches beginning June 8 in the 24-team tournament, featuring some of the sport’s most elite players.

Don Hardman, national organizing committee chief stadia officer, along with Tatjana Haenni, FIFA’s deputy director and head of women’s competitions, were taken on a tour of the stadium before speaking to media on Saturday.

While the topic of the day was supposed to be preparations for next summer’s competition, both faced a barrage of questions over a recent lawsuit brought forward by female players regarding the playing surface.

Several women players filed legal action with the Ontario Human Rights Tribunal in Toronto against the Canadian Soccer Association (CSA) and FIFA over not being able to play on grass like their male counterparts. The suit cites sexism as one of the accusations against soccer’s governing body.

Haenni said Investors Group Field will be an excellent venue for the tournament after touring it, but couldn’t provide comment on the pending court case. She said there are no plans to replace the artificial turf in Canadian stadiums to grass.

The first match will take place in Edmonton on June 6. Five other Canadian cities will host the one-mont event.