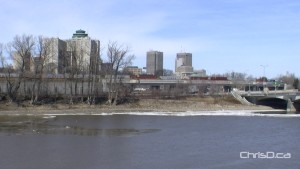 The Red River as seen from the Winnipeg Rowing Club (CHRISD.CA FILE)

Two people were sent to hospital Tuesday night after becoming stuck in mud along the riverbank.

The Winnipeg Fire Paramedic Service rescued the people trapped at the edge of the Red River near the St. Boniface Hospital at around 7 p.m.

The WFPS is reminding the public to use caution around all bodies of water in the city as current water temperatures can quickly cause hypothermia and injury.

← Previous: Manitoba Cottagers to Be Without Power on Friday Next: David Sanders Goes After the Youth Vote →
Tags: City of Winnipeg | Red River