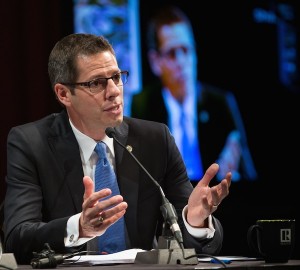 Winnipeg mayoral candidate Brian Bowman would end the policy in place to pay outgoing city councillors with hefty severance packages in the tens of thousands of dollars.

Speaking at his campaign office on Saturday, Bowman said that would be just one measure to find cost savings at city hall.

“I think many Winnipeggers were surprised to learn that members of council, who are choosing not (to) seek reelection, are receiving some very generous payouts,” said Bowman. “We need to phase that out and commit that money back to infrastructure.”

Councillors Dan Vandal, Justin Swandel, Scott Fielding and Paula Havixbeck will receive severance in the range of $22,000-$52,000 when they leave office this month. Mayor Sam Katz will collect about $86,000.

Bowman would also impose restrictions on councillor ward budgets, create an innovation committee to find the best practices for service delivery and technologies, and eliminate the city’s campaign subsidy for individuals who donate.

He also announced to dissolve the office of policy development and communications, and introduce a new benefit and pension plan for new city employees.