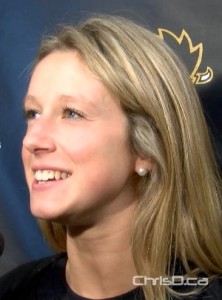 University of Manitoba Bisons volleyball player Brittany Habing has been named one of the Top 8 Academic All-Canadians by Canadian Interuniversity Sport.

The East St. Paul, Man. student-athlete maintains an academic average of 80 percent or higher in her science studies and was recognized by the Canadian West Universities Athletic Association (CWUAA) for her accomplishments.

“Brittany is such an outstanding representative of our program, our conference and our university,” said Bisons head coach Ken Bentley. “We are all so proud of her accomplishments in the classroom and on the court.”

Habing began her university playing career with the Winnipeg Wesmen before transferring to Manitoba after two seasons. In her Bisons’ debut, she was named a second-team Canada West all-star after she led the country with 10.46 assists per set and later voted to the CIS Championship all-star team.

Habing is currently in her fourth year of player eligibility and will be honoured at Rideau Hall in Ottawa on November 17 with the seven other student-athletes.