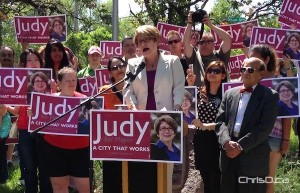 Wasylycia-Leis spoke to reporters in front of a crumbling section of Roblin Boulevard in front of the Assiniboine Park Zoo to make her point.

“The poor conditions of our roads create headaches for Winnipeg drivers and leave an unfavourable impression on visitors who come here to see world-class attractions such as the Journey to Churchill exhibit,” Wasylycia-Leis said. “Investments in regional and local streets are critical to the economic health of our city.”

The former NDP MP said she would invest an additional $60 million to the already $340 million committed by the city to repair roads.