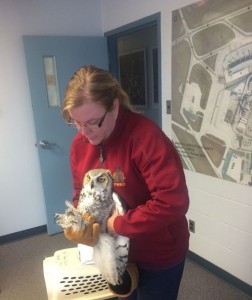 Airport officials say upon discovering the animal, they contacted the Prairie Wildlife Rehabilitation Centre to assess the owl and take him back to the centre for care and rehabilitation.

The owl had broken its left hallux and is receiving care at the centre.

“We’re happy to hear that the break has been cared for, and that the owl is now recovering,” the Winnipeg Airports Authority wrote on its blog.