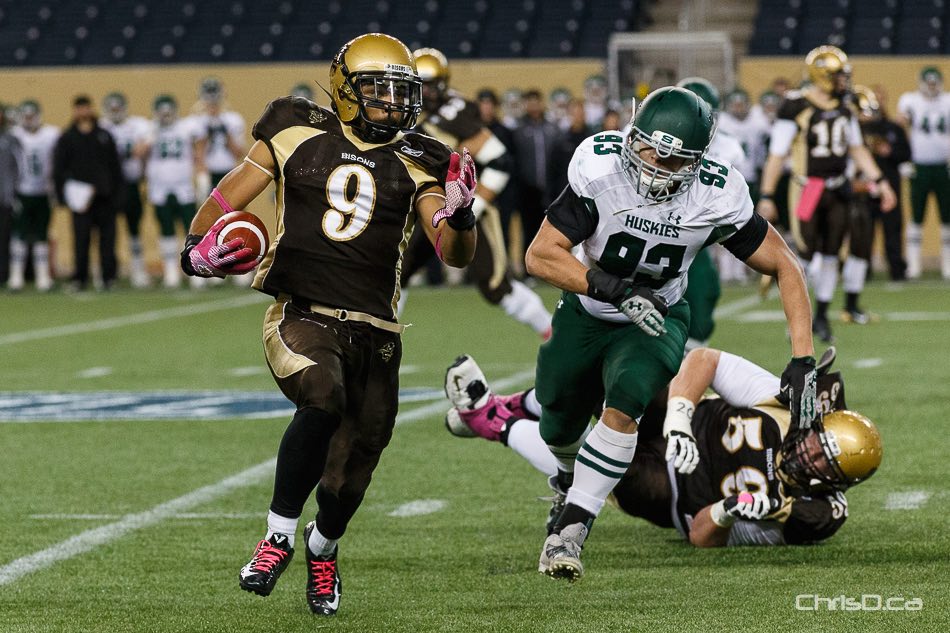 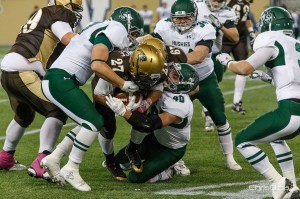 The Bisons led 38-1 after three quarters and cruised to the victory thanks to a superb rushing effort by Kienan LaFrance and excellent special teams play by Nic Demski.

“It was a next to a must-win for us,” said Bisons head coach Brian Dobie. “Not only did we get a win that we really, really needed, we did it in a methodical way I thought it was the best all-around win since the Vanier Cup win in 2007.”

Linebacker Jonathan Jones was an active member of the Bisons all-consuming defence. He concurred with coach Dobie’s assessment of the complete game played the squad.

“We didn’t really have a choice but to come out and win it,” Jones said. “It was a good response coming out of the bye week. It was a complete game for us from all three units.”

The bye week for the Bisons proved to be beneficial, as the team held an extra day of practice and rested several injured players. Unfortunately for the Herd, quarterback Jordan Yantz left the game with a suspected concussion and was taken to hospital for examination.

The Bisons remain unbeaten at home with a perfect 3-0 mark. The Herd previously defeated the UBC Thunderbirds 20-10 (September 20) and the Regina Rams 42-18 (September 12).

The Bisons next face the Regina Rams at Mosaic Field in Regina, Saturday, October 25. The Huskies next game is at home against the Alberta Golden Bears at Griffiths Stadium the same day.