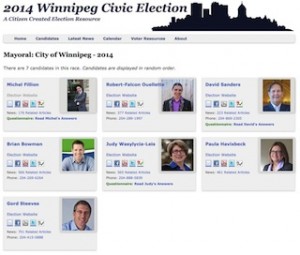 It’s difficult to separate the noise from the substance in Winnipeg’s municipal election campaign, but the team behind WinnipegElection.ca does its best.

The website has become a valuable resource in elections over the years, including the last civic election in 2010.

More than 45,000 voters visited the site four years ago to find out more about the mayoral, councillor and school trustee candidates. This year, the site also features questionnaires from over 121 candidates.

The site is run by Open Democracy Manitoba, which also operates ManitobaElection.ca.

The group’s efforts have earned them a $25,000 grant from the Canadian Internet Registration Authority’s community investment program to continue their work. CIRA manages the .CA top-level domain on behalf of all Canadians.

ODM will use the grant funding to build a general purpose election toolkit for future civic and provincial elections. This project will be open-sourced with the intention of allowing other citizen groups throughout Canada and the rest of the world to make their own election portal websites.

Besides election profiles, WinnipegElection.ca rounds up press coverage from the campaign trail, including articles from ChrisD.ca and other media.