Spiralling Bombers Give Surging Stamps a Run for Their Money 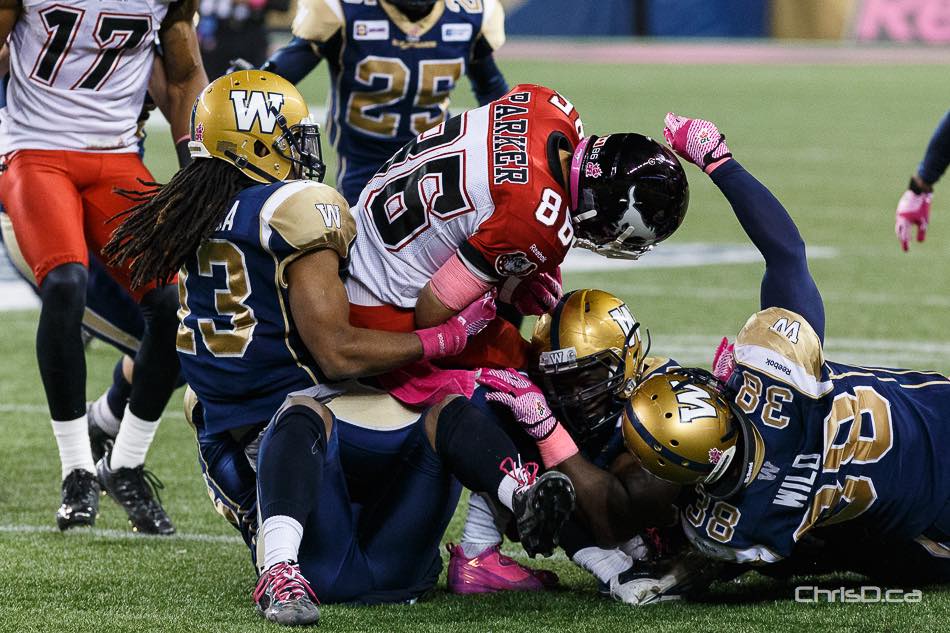 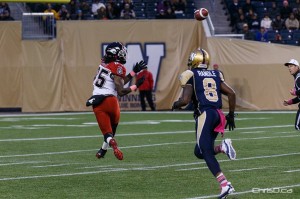 WINNIPEG — Even with all the odds stacked against them, the Winnipeg Blue Bombers gave the class of the CFL a serious run for their money Saturday night before ultimately falling 33-23 to the Calgary Stampeders in front of 22,320 at Investors Group Field.

The Stamps’ win clinches top spot in the West for the 13-2 club, while the 6-10 Bombers — who remain mathematically alive in the chase for a playoff spot — suffer their seventh-consecutive loss and ninth in their last 10 games.

It’s quite a far cry from the 5-1 start head coach Mike O’Shea‘s club enjoyed through June and July. 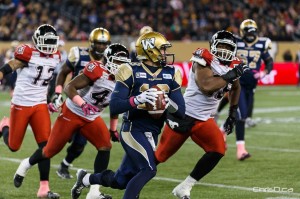 “There are a lot of positives that come out of this. Specifically, getting back after it the way we did after a tough loss,” said O’Shea after giving a laundry list of injury updates in his post-game chat with media. “It doesn’t excuse losing. There are things we need to correct. There are things we could’ve done differently. There’s mistakes we made that I believe lead to this result. And we’ll do the same thing we do every week. We’ll inspect and talk about the flow of the game and when things happen and the results.”

Headed into the game, things looked pretty bleak for the Blue Bombers: without quarterback Drew Willy due to a hand injury suffered last week, a somewhat hastily-assembled and inexperienced O-line, new starters lining up in the linebacking corps, and a running back looking to make a splash in his second start — his first since the No. 1, Nic Grigsby, asked for his release earlier this week.

“I’ll be satisfied once we start winning,” said Paris Cotton, who exploded for 108 yards rushing on 14 carries and two TDs. “I’ve never believed in moral victories since high school. So until we win, it’s just a loss.”

Quarterback Brian Brohm made his first career CFL start for Winnipeg, going 14-of-23 for 194 yards before leaving early in the third quarter with a hand injury. Mike O’Shea suspects it is a broken thumb, and also said he expects Drew Willy to be ready to return next week for a pivotal game against the B.C. Lions.

So with the No. 1 and No. 2 pivots both out, Mike O’Shea tapped 25-year-old rookie quarterback Robert Marve on the shoulder to lead his offence on the field.

“I felt like we played hard this game. We understood the situation coming into the game. We’re not happy with the loss, for sure,” said Marve, who electrified the field and crowd with his escape-ability and impressive arm. “But we showed some fight out there and we need to keep it moving forward to next week.”

“We had a little momentum — I felt like the whole stadium could feel it. The defence was stepping up big for us and special teams starting to hit… I kind of felt the momentum shift and definitely would’ve like to have a drive at the end to see if we could make some magic happen, especially at home.”

The Blue Bombers hold their final home game on Saturday at 6 p.m. against the Lions before wrapping their regular season with a rematch in Calgary against the Stampeders.