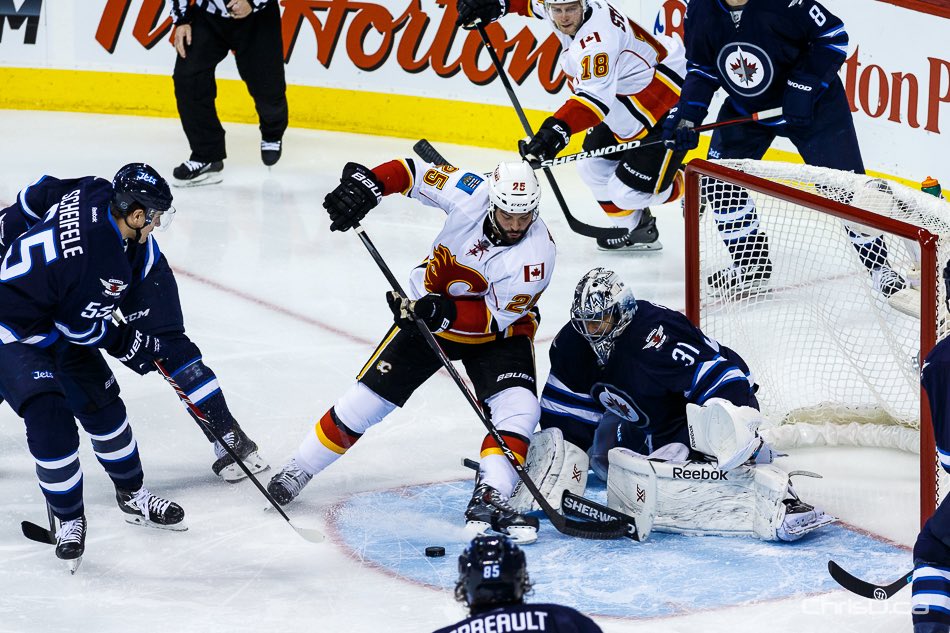 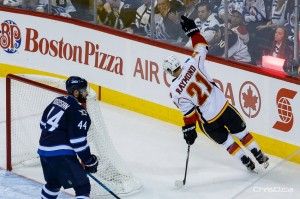 WINNIPEG — It only took seven minutes for the Calgary Flames to do the damage they needed to hand the struggling Winnipeg Jets a 4-1 loss — their fourth-consecutive — in front of a sold-out 15,016 at MTS Centre Sunday night.

In a span of just 6:42 in the second period, the Flames found the back of the net via Dennis Wideman, Johnny Gaudreau, and Mason Raymond to go up 3-1 and conclude their six-game, 11-day road drip on a high note. Raymond added two assists to complete his impressive outing.

The Jets, meanwhile, have now gone four games with only two goals to their name, with shutout losses at the hands of San Jose and Nashville, and 4-1 defeats to Los Angeles and now Calgary. The lack of any sustained scoring punch has Winnipeg at 1-4-0 and at the bottom of the Central Division standings.

“Everyone keeps saying it’s only October, but I mean we’re going to do everything we can to change this right away,” said Jets centreman Bryan Little, whose three tallies this season lead the goal-starved club. “We know that it’s never good losing four games in a row, and especially to start the season. I think if anything it’s just a confidence thing and a mental thing. The confidence is a little low right now.”

The home side came out of the gate strong outshooting the Flames 13-6 in a high pressure first period, heading into intermission leading 1-0 on a smooth three-way passing play originating from Mathieu Perreault behind the net that Blake Wheeler slid cross-crease to Mark Scheifele who buried his first of the year.

“They were on the body and we weren’t. That’s the main thing,” said Scheifele. “We needed to stick to the game plan we had in the first and we stray wed from that.”

“It definitely felt good to put one in,” added the 21-year-old sophomore of his first marker of the season. “But when the team doesn’t win it’s not a very good feeling, and I know everyone doesn’t want to lose.”

Calgary went ahead by three early in the third as TJ Brodie jumped on a dribbling rebound in front of Jets goaltender Ondrej Pavelec.

Pavelec stopped 25 while dropping his record to 1-3-0 on the season.