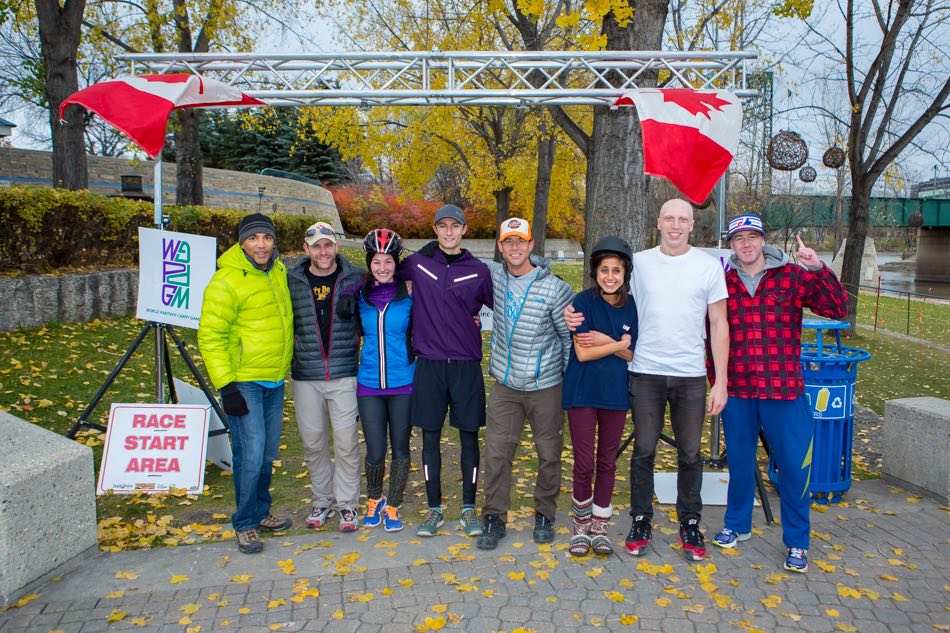 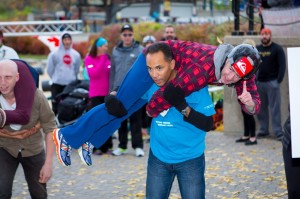 Ace Burpee of 103.1 Virgin Radio and Tim Hague Sr. from “The Amazing Race Canada” teamed up to race in the 1st World Partner-Carry Games held at The Forks on Saturday. (KELLY MORTON / SWAMPDONKEYAR.COM)

WINNIPEG — The Forks saw a vigorous and entertaining competition on Saturday with the first of the World Partner-Carry Games.

“I think it was better and more hilarious than we thought,” said Virgin Radio host and event organizer Ace Burpee.

The idea came from the World Wife Carrying Championships in Europe and had a little tweaking to the name before starting up in Winnipeg.

“I always thought the World Wife Carrying championships sounded a bit old. Partner is where it’s at, anyone can carry anyone,” said Burpee.

The event brought out 13 teams of two who came to participate in an obstacle course while carrying their partner to win their weight in beer.

The mission was a 269.6 meter long course which involved running through sand, bungee cords, over barrels and ducking under a net without losing or clipping their partner.

“There’s a good mix in these kind of races of people that just want to finish and people that like to compete and win, in events like this both parties can co-exist,” said Burpee.

Winners Cole and Chloe of team #fullytorqued came in at 1 minute and 20 seconds. The pair took home 11 cases of tall cans of beer, donated by Farmery Estate Brewery. They decided to participate in the competition after some drunken motivation.

“Both of us got drunk one night and I carried her to her bed and the next day at school she was like ‘perfect, look at what I found on the Internet,’” said Cole. “‘We can win this!’ So we just showed up and we did.”

The organizers at Swamp Donkey Adventure Racing look forward to continuing the quirky event with hopes to elaborate on this year’s results.

“We might change things up a bit next year, make it a little bigger and more exciting,” said race director from Swamp Donkey Adventure Racing John Ford.

With plans to start registration in the spring, they hope to get up to 150 teams next year.

“To start anything you have to show people that it’s fun and legit and worth doing,” added Burpee.