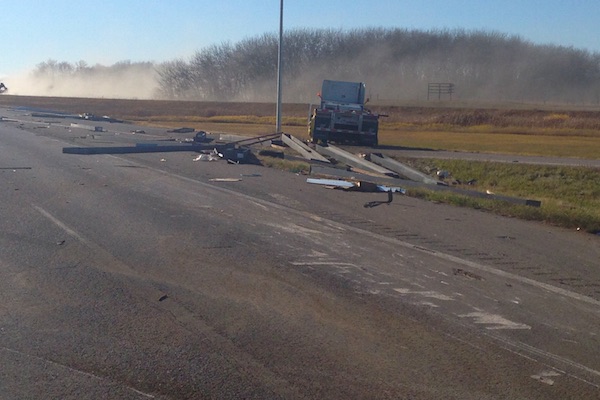 The aftermath of a crash involving a semi-trailer truck and a pickup on Highway 1 near Oak Lake on Monday, October 20, 2014. (RCMP HANDOUT)

A two-vehicle crash near Oak Lake, Manitoba on Monday afternoon was unavoidable for the driver of a semi truck, according to RCMP.

The semi collided with a pickup truck on Highway 1 near PR 254, with both vehicles ending up in opposite ditches.

RCMP say the semi was transporting beams of steel when a GMC Sierra entered the westbound lane from PR 254, directly in the path of the ongoing semi.

Two passengers in the Sierra, a 19-year-old man and 56-year-old man — both from the community — suffered more serious injuries.

Police say alcohol is suspected to be a factor in the collision.

← Previous: Bowman: This Election is Ours to Win Next: Steeves Presses on in Fight Against BRT Expansion →
Tags: Accident | Manitoba | RCMP