Jets Cruise Through the Hurricanes 3-1 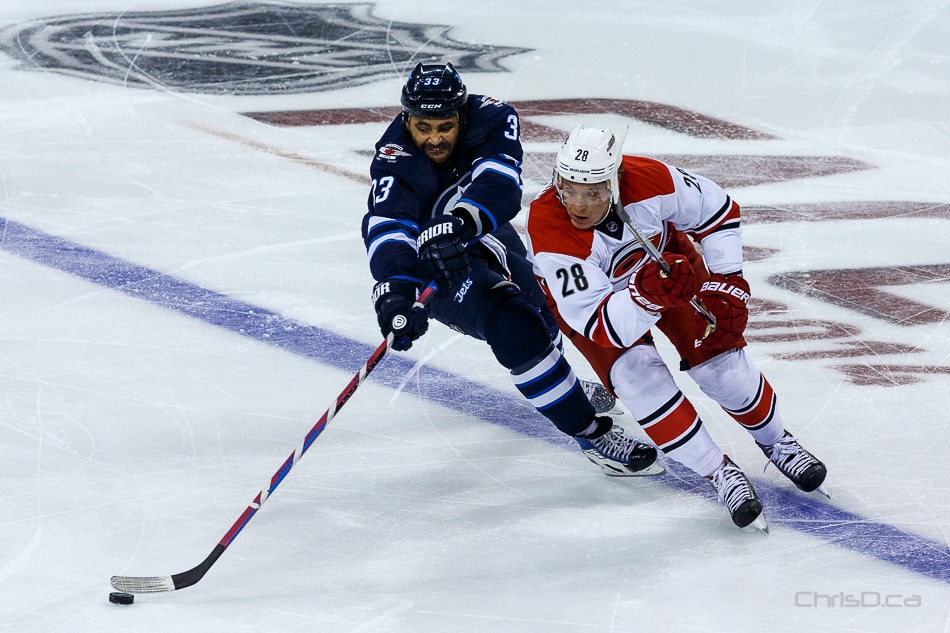 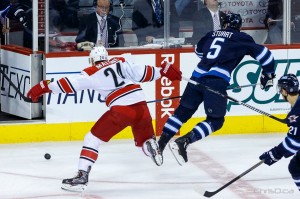 WINNIPEG — It may have taken a visit to MTS Centre by the NHL’s only winless club, but it was just what the doctor ordered for the goal-starved Winnipeg Jets, clipping the Carolina Hurricanes 3-1 to end their four-game losing streak in front of a sellout 15,016 in attendance Tuesday night.

The Jets scored two quick ones in the game’s opening three minutes — just 40 seconds apart — to put the ‘Canes on their heels and capture their first home-ice victory of the season. A quick start and multiple goals — just what was prescribed for a team that had scored only twice in their previous four games and whom widely spoke this week of dampened bench energy when facing adversity or immediately following opposing goals.

“It was a good bench tonight. It was as good a bench as I’ve seen in a long, long time,” said Jets head coach Paul Maurice. “And it was under pressure. There’s pressure here, and certainly we all felt it going into the game.” 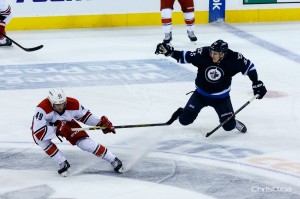 “It’s definitely pretty relieving,” said Jets sophomore defenceman Jacob Trouba of the team’s first win since the season-opener down in Arizona on October 9. “I think everybody felt a little bit of pressure. It’s just a natural feeling, but it feels good to get that (win).”

It took a video review to determine Winnipeg’s opening goal, but Jets captain Andrew Ladd was eventually awarded his first of the season on a traffic jam net-side scramble that he was able to slide underneath Carolina goaltender Anton Khudobin.

Jets rookie Adam Lowry, who was moved from wing to his natural centre position heading into Sunday’s game, notched his first-career NHL goal by deflecting a Grant Clitsome point-shot.

“It was a pretty special feeling to tip it and then see the puck go through his legs. I was pretty excited,” said the 21-year-old, whose first will also go down in the books as extra-special — a game-winner. “I know a lot of my family and a lot of my friends were watching, so I’ll have quite a few texts after the game.”

“I think anytime you score you want to score in a winning game. It makes that feeling all the more special. We got off to a hot start and that starts with our leaders in the room in Ladd and (Bryan) Little.”

Jiri Tlusty‘s fourth marker in just his fifth game this year, coming on the power play, was the only puck Carolina was able to get past Winnipeg’s Ondrej Pavelec. Pavelec, improving his own record to 2-3-0 on the year, stopped 21 shots as the injury-depleted Hurricanes struggled to generate any sort of offensive attack.

Dustin Byfuglien added the insurance late in the second, blazing on the breakaway and sliding it backhand five-hole before his on-ice celebration brought him to the Jets bench where he was mauled by teammates.

The 2-4-0 Jets complete their five-game, 10-day home stand when they host Tampa Bay and Colorado on Friday and Tuesday.