Wasylycia-Leis Not Done Her Fight to Build a Better Winnipeg 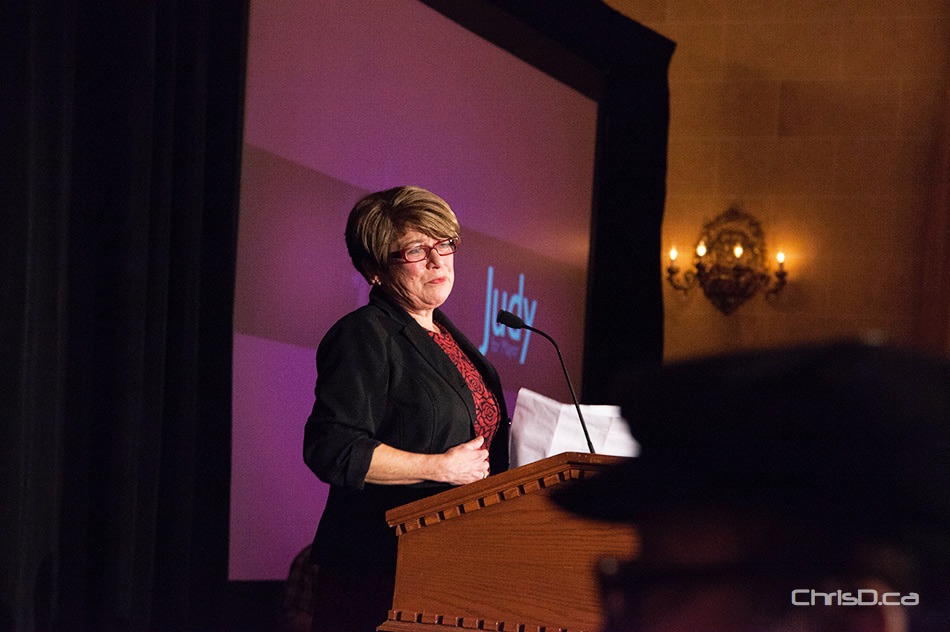 WINNIPEG — It was not the outcome supporters of mayoral contender Judy Wasylycia-Leis were hoping for Wednesday night.

“I feel quite sad,” said a sombre Terry Boettcher, 66, as results flashing on two large screens in the Fort Garry Hotel’s Grand Ballroom made it clear Wasylycia-Leis, a career NDP politician, had been bested in the race to be Winnipeg’s next mayor by lawyer Brian Bowman.

It was obvious from the faces in the crowd of about 125 volunteers and supporters he wasn’t the only one feeling low.

Boettcher, a retired teacher, spent the campaign door-knocking and getting out the vote. Earlier in the evening he had expressed anxiety, saying friends of his had moved from JWL to Bowman in the last days of the campaign. After months of double-digit poll leads for JWL, a poll on Monday that showed Bowman pulling even fed Boettcher’s anxiety, he said.

By 9 p.m. the numbers confirmed Bowman would be Winnipeg’s next mayor, and soon after JWL emerged to address about 125 people gathered.

“What’s next?” came a question yelled from the crowd.

“I will continue to fight with every breath I’ve got to build a stronger city,” was her answer, bringing cheers.

JWL said she had just spoken on the phone with Bowman.

“I wished him well… I congratulated him for a decisive victory and said ‘you deserve the votes you got, you ran a hard campaign, you ran a solid campaign. I will work with you to build a city that works.”

She said she asked Bowman to use his time as mayor to bridge the divide in Winnipeg and build ties with aboriginal people.

“I urge you to implement my aboriginal accord, I urge you to build a new relationship with our indigenous peoples. Our future depends on it.”

Answering media questions later, JWL said she has no “regrets or remorse or hurt right now… I ran a solid campaign. I did everything I could.”

Her failed 2010 effort to be Winnipeg’s mayor hurt more than this one, she said, because “we could have done more to actually defeat Sam Katz at that time.”

A dejected Marvin Silver, who said he worked for JWL in the 70s in an Ontario campaign, said Bowman’s team was better at getting out the vote.

“This is a democracy, and the people have spoken, and whether we like it or not we have to accept the results,” he said.

JWL said her future plans include volunteering with community organizations and working to spread democracy internationally.

And no more stabs at Winnipeg’s top job.