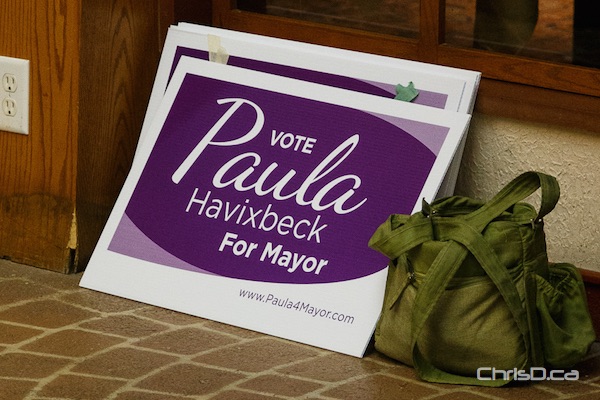 WINNIPEG — Paula Havixbeck says after serving a term on Winnipeg city council and running unsuccessfully for mayor, what she needs next is a couple of days of rest.

“Or at least one, to get my bearings.”

Havixbeck, who gave up her council seat in Charleswood — Tuxedo to run for mayor, told supporters Wednesday night she’s proud of the campaign she ran.

“I’m pleased that I went right to the end,” she said in a speech. “There was a point where you could say, ‘I’m folding my camp into someone else’s,’ and I refused to do that.”

Havixbeck admits the outcome wasn’t what she had hoped. As a city councillor, she could have expected name recognition similar to that of fellow former councillor Gord Steeves, who garnered a much larger portion of the vote in early results. However, she says she didn’t have the experienced campaigners she needed until it was too late.

“If I had that maybe six months earlier,” Havixbeck says, “it could have been a different story.”

Havixbeck’s friend Barbara Pritchard joined supporters at the Canad Inns Fort Garry Wednesday night. She called it a shame Havixbeck would not be able to help Winnipeg any longer.

“She was revealing what was happening at city hall to the average person. She would have made an interesting mayor.”

Havixbeck says even after her defeat, she stands by her decision to leave her council seat and run for mayor. However, she would not say what, if anything, the future may hold for her beyond some much-needed sleep.

According to unofficial election results, Havixbeck’s Charleswood — Tuxedo ward will now be represented by Marty Morantz, who will be one of seven fresh faces at city hall. To her successor and the other newcomers on council, Havixbeck offers a piece of advice.

“Ask questions,” she says with a smile. “Don’t just take a report as being something that you should just rubber stamp.”