Home » News » Ouellette ‘Nervous,’ But Has No Regrets in Mayoral Campaign

Ouellette ‘Nervous,’ But Has No Regrets in Mayoral Campaign 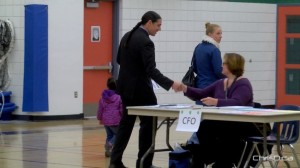 Mayoral candidate Robert-Falcon Ouellette shakes the hand of an election official at his local polling station on Wednesday, October 22, 2014. (CHRISD.CA)

Mayoral candidate Robert-Falcon Ouellette cast his ballot at a polling station in St. Vital on Wednesday.

Ouellette is one of seven candidates vying to be Winnipeg’s next mayor and will be watching the results come in with family and friends this evening at his Provencher Boulevard campaign headquarters.

“I don’t know if I could do anything different,” Ouellette said when asked to reflect on his campaign. “I guess I could have run around trying to get support from business people other than special interest groups, but I think what’s what actually allows my campaign to be as independent as it has been.” 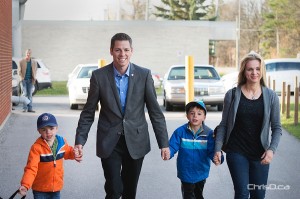 Ouellette’s opponent, Brian Bowman, arrives at a Charleswood polling station with his family to vote on Wednesday. (SARAH TAYLOR / CHRISD.CA)

Ouellette voted at École Christine-Lespérance alongside his wife and daughter before speaking with reporters waiting outside the gynmasium.

The University of Manitoba administrator was in third place with 14 percent of the decided vote in a poll released on Monday. He sits behind Brian Bowman, a privacy lawyer, with 38 percent, and Judy Wasylycia-Leis, a seasoned politician, at 36 percent.

“We’re nervous. We were really interested to see what the voter turnout is going to be among the aboriginal population, among the youth… if they come out, this is all open. If they don’t come out, then it will demonstrate that it’s very hard to motivate people to vote in elections.”

Polling stations are open until 8 p.m. city-wide. To find your location, visit Winnipeg.ca.