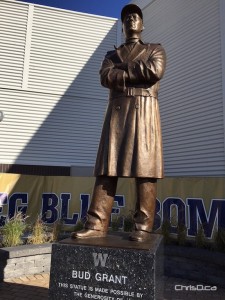 The football club on Thursday pulled back the curtain on the 7’6″ bronze statue representing Grant, the team’s most winningest head coach of all time. Grant was at the helm of the Bombers from 1957 to 1966.

“This is not me,” a humble Grant said of the statue, crafted by MST Bronze Limited. “It may be a likeness of me, but it doesn’t represent me. It represents everybody that played for the Bombers, not only in my time, but all time. It’s a great tribute.”

Grant had 290 wins in the NFL and CFL combined, and first played offensive end for the Bombers from 1953-56. He was hired to be head coach at the age of 29 a year later.

“We believe this statue will be an everlasting symbol of the winning tradition of the Bombers, and we believe it will become a favourite meeting place for our Blue Bomber fans when they come to the stadium,” said Wade Miller, Bombers’ president and CEO.

Miller also announced the club is planning a Hall of Fame walk outside the stadium along Gate 1 near the Bomber Store. Plaques will honour former players and allow fans to recognize their contributions to the sport. Miller said the walk will be unveiled before the first home game of the 2015 CFL season.

The cost of the statue was covered by private corporate and community donations.