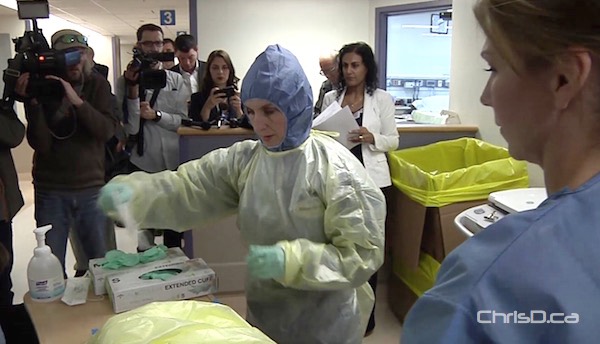 A nurse puts on protective layers to demonstrate Ebola preparedness at the Health Sciences Centre in Winnipeg on October 20, 2014. (CHRISD.CA FILE)

The Winnipeg Fire Paramedic Service has undertaken a new screening process for possible signs of Ebola.

“I want to reassure the public that the WFPS is prepared to handle a call involving a potential Ebola-infected patient,” said WFPS Chief John Lane. “Although the risk of infection remains extremely low in Winnipeg, the WFPS will continue to practice and strengthen our processes for responding to a possible case of Ebola and other infectious diseases.”

Unlike the United States, there have been no reported cases of Ebola in Canada.

The WFPS said it will provide the public with weekly updates on Ebola preparedness. Earlier this week, nurses at the Health Sciences Centre demonstrated the precautions they’re taking, should a patient with Ebola be identified in Winnipeg.