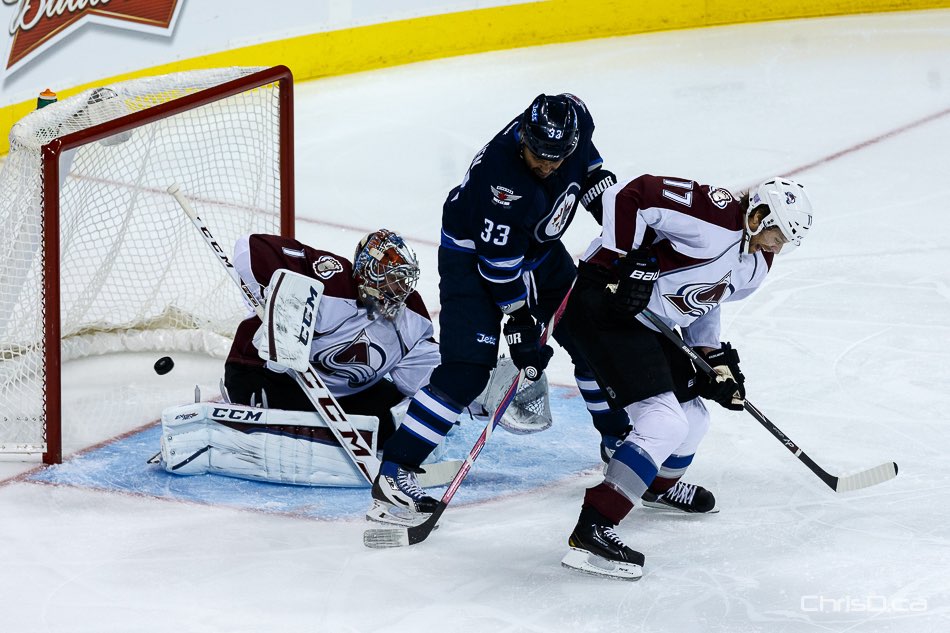 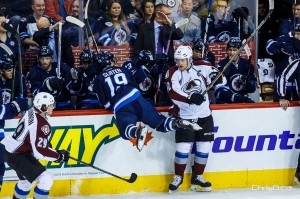 Winnipeg Jets forward Bryan Little (18) gets dumped into the boards against the Colorado Avalanche at MTS Centre on Sunday. (SHAWN COATES / CHRISD.CA)

WINNIPEG — Midway through the second period of Sunday’s matinee between the Jets and Avalanche, Dustin Byfuglien careened wildly into the corner of the offensive zone, put a forearm to knock Tyson Barrie into the boards, then turned to John Mitchell next to him and gave him a hearty shove to the ice.

Helmets went flying, bodies piled up and the MTS Centre went wild. Those ten seconds were the thesis of a physical 2-1 overtime win by Winnipeg.

Colorado, a team that thrives on their offensive speed, was mostly kept to the corners by Winnipeg — the line of Byfuglien, Adam Lowry and Chris Thorburn was especially effective, amassing 13 hits in regulation. 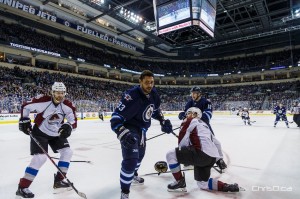 “[Byfuglien’s] such a big man. He’s so solid, but you’ve seen that… he just doesn’t get knocked down over the course of the game,” said Jets head coach Paul Maurice. “I think he likes playing with Adam Lowry, that’s a couple of big guys. Those are hard men to hold on to down low.”

The win improves Winnipeg’s mark to 3-5-0, while the overtime loss sees the Avalanche fall to 2-4-3 in what’s been a disappointing start to their season. For the Jets, the overtime winner came off the stick of Bryan Little. The first goal was scored by Andrew Ladd at 6:25 in the first, his hundredth goal in a Winnipeg Jets uniform.

“First and foremost, I thought we took care of the puck. Against [Colorado], that’s the biggest thing. They feed off that transition, I thought we were good from our end out,” said Ladd. 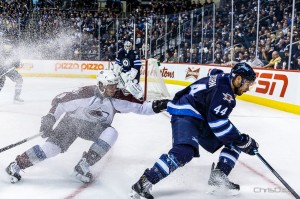 The lone Avalanche goal came from Jamie McGinn on the power play, as he beat two Jets in a battle for a Ondrej Pavelec rebound to tie the game with 17 seconds left in the first period. Apart from that, though, the Jets goaltender was solid — making 22 saves, none bigger than on two Maxime Talbot breakaways in the first and a Gabriel Landeskog snipe early in the overtime frame.

“He was big, made some good saves. We gave him a little bit of a better chance on those breakaways to make hard saves and have those be the difference in the game,” said Maurice. “This is what we know we can do if we give him the chance.”

Despite the win, the Jets went 0-for-4 on the power play, and are now just a gloomy 1-for-28 on the season. Their penalty kill, on the other hand, was fourth-best percentage-wise in the NHL heading into Sunday and came through huge in the third period. A late penalty around the 16-minute mark gave the Avalanche some life, but two big Pavelec saves kept the game tied and headed to extra time.

The Jets now head out for a tour of the Greater New York area. They’ll start on Long Island to play the Islanders on Tuesday night, followed by the Devils on Thursday and the Rangers on Saturday.

After a stop in the Windy City, the Jets will play their next home game on Tuesday, November 4 against the Predators.