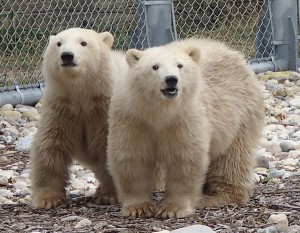 Two orphaned polar bear cubs will be introduced to the public on Friday at the Assiniboine Park Zoo. (HANDOUT)

The public will get its first in-person glimpse on Friday at two orphaned polar bear cubs who arrived at the Assiniboine Park Zoo in late September.

The siblings have been in a standard 30-day quarantine hold since arriving to the zoo and are both doing well. They were first spotted by a helicopter in Churchill, Manitoba and eventually rescued.

“The cubs will spend a few more days exploring their outdoor enclosure off exhibit before making their public debut on Friday,” said Dr. Brian Joseph, director of zoological operations at the Assiniboine Park Zoo.

“They will remain on exhibit at the IPBCC for several months, growing and adjusting to their new home. When we feel they are ready we will begin the process of introducing them to our other bears in the Journey to Churchill exhibit.”

The public can name the cubs by voting in a poll on the zoo’s Facebook page.

The public unveiling of the cubs will be Friday, October 31 at 10 a.m. at the International Polar Bear Conservation Centre (IPBCC).