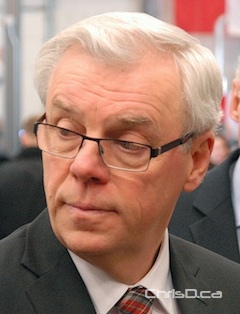 WINNIPEG — Manitoba Premier Greg Selinger broke his silence Tuesday after being questioned on his inability to lead the NDP government into the next provincial election.

There was speculation Selinger would resign from his position, but he shot down that idea in front of a room swarmed with reporters. Selinger cited his party’s track record and recent accomplishments in regards to job growth, infrastructure and reaching out to the aboriginal community.

“I’ve said we have to focus our energy on the priorities of Manitobans — that’s where we need to be putting our efforts,” Selinger said. “As cabinet ministers, as caucus members, and the conversation has to focus on those priorities. I’ve had that conversation with them (cabinet), and emphasized the need to do that as we go forward to continue to work together as a team in this province.”

He also unexpectedly said he would seek re-election in the next provincial election in 2016, while being surrounded by 15 MLAs at the Manitoba legislature.

Pressure has been mounting on Selinger since last week’s civic election, when former NDP MP and MLA Judy Wasylycia-Leis lost her bid to become Winnipeg’s mayor by a large margin to Brian Bowman. The NDP has also been sinking in recent polls, showing the public is growing tired of the party since it came into power in 1999.

This week, MLAs and high profile cabinet ministers have been speaking out, suggesting Selinger step aside and consider resigning based on the public’s growing discontent with the party.

Cabinet ministers Erin Selby, Theresa Oswald and Andrew Swan added their voices to those doubting Selinger’s leadership on Tuesday. On Monday, Jennifer Howard and Stan Struthers questioned the future direction of the party.

“All options are on the table as we go forward,” Selinger said, in terms of his team’s commitment to work on his continued “vision” for Manitoba. Selinger hinted that a cabinet shuffle may in the works, but stopped short of saying there would be repercussions for those ministers who doubt his leadership ability.

Political analysts say the NDP must have a new leader going into the next election if it hopes to remain in power over Brian Pallister’s Progressive Conservatives.

Selinger has faced a public backlash ever since raising the province’s PST to eight percent last year — just two years after stating in an interview his party would never entertain such an idea.

The premier was scheduled to attend a Jewish Foundation of Manitoba event on Monday, but was a no-show. He also cancelled a cabinet meeting scheduled for earlier today.