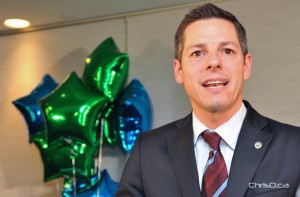 Mayor-elect Brian Bowman addresses supporters at Inn at The Forks on Wednesday, October 22, 2014 after being declared Winnipeg’s next mayor. (TED GRANT / CHRISD.CA FILE)

WINNIPEG — Brian Bowman will be sworn in this evening as the city’s new mayor, along with seven rookie councillors and eight returning councillors.

Bowman, a former privacy lawyer, met with council last weekend at Inn at The Forks to lay out his plan and get to know his team.

Tonight’s invite-only ceremony will begin with a blessing behind closed doors by an aboriginal elder. Bowman is of Métis heritage.

Bowman ran his campaign on transparency and openness, vowing to share much of his power with members of council to appoint their own to EPC. But a provincial rule in place prevents him from doing that, therefore only Bowman himself will be able to appoint councillors to the powerful committee.

The oath of office is set for 8 p.m. The first full council meeting will be held on November 12.

ChrisD.ca will publish a photo gallery from tonight’s ceremony.