U of M Student Newspaper Turning 100 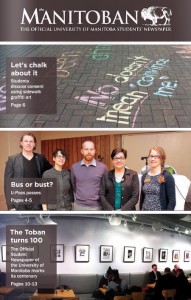 The official student newspaper of the University of Manitoba will turn 100 on Wednesday.

It was on November 5, 1914 when The Manitoban was first launched in the province, after a group of U of M students wanted to create a forum of expression for their classmates.

Since then, the paper has gone on to be run completely independent through the Manitoban Newspaper Publications Corporation, employing dozens of student journalists with assistance from volunteers in the community.

In 2009, the University of Manitoba’s Archives and Special Collections partnered with the Manitoba Museum to digitally preserve the paper copies of the Manitoban, and began an ambitious project to digitize the entire 90+ year run of the paper.

Through numerous financial donations, the paper was made available in November 2013 before the project was fully completed this past March. A soft-launch to the public was rolled out in the summer.