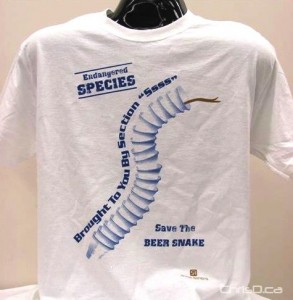 They shut it down at Canad Inns Stadium, but the famous “beer snake” Winnipeg football fans once loved will be back in 2015.

The Winnipeg Blue Bombers are creating a “fanatic fan zone” next CFL season, catered toward the loudest fans in Investors Group Field. This zone, also known as section “S” (140 and 141), will allow fans to build a snake-like tower out of empty beer cups.

“We are always listening to our fans. They’ve told us they want a place where they can stand on their feet all game, wear their craziest Bomber gear, and cheer at top volume from the opening whistle until the final snap,” said Blue Bombers president and CEO Wade Miller.

“We created this area so these fans can enjoy the game in their unique way, without disturbing some of our more traditional fans.”

The Bombers also announced pricing for season tickets next year when the club will host the Grey Cup.

“The increases are necessary due to increasing operating costs of the club, most notably in football and facility operations,” Miller added.

Season tickets in the fanatic fan zone will cost $338.50.

Fans who commit to a three-year season ticket package will get a $100 discount on each of their 2015 Grey Cup tickets in Winnipeg, resulting in a price range of $175 to $399 for general seating. The deadline for the 2015 season is December 15, with an early bird draw on December 1.