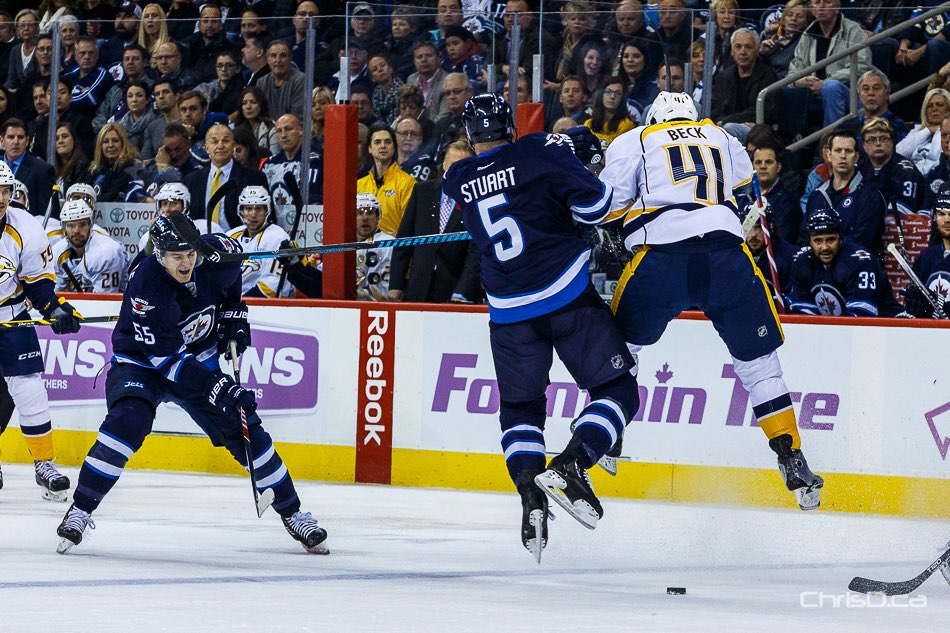 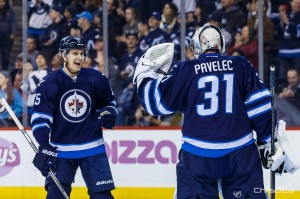 WINNIPEG — The Winnipeg Jets blasted off the tarmac Tuesday night, scoring a pair of power-play goals on just three shots in the opening six minutes. The two quick goals proved to be just enough as the surging Jets hung on to beat the previously Central Division-leading Nashville Predators 3-1 in front of a capacity 15,016 at MTS Centre.

Winnipeg — now 7-5-1 and tied with Chicago for third in the Central Division with 15 points — has been superb defensively as of late, allowing just one goal in their last three games to set a new franchise record by going 161:17 without allowing a goal against.

“It’s not defence first. It’s defence at the right time. We don’t have the puck — we’re hunting it and we’re defending,” said head coach Paul Maurice, his team now undefeated in regulation in their last six contests while allowing just seven goals. “I think that tonight we were OK. I think the two games prior our goaltenders, (Ondrej Pavelec and Michael Hutchinson), that’s a goaltender record. They were that good.” 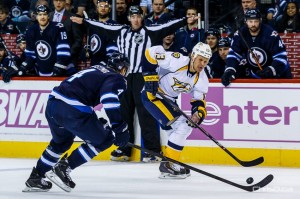 A Dustin Byfuglien point-blast, bravely stepped in front of by Andrew Ladd, was tipped by the captain for Ladd’s fifth of the year, coming 2:53 into the first period.

48-seconds later Winnipeg-native Colin Wilson took a hooking penalty, giving the Jets the man-advantage again. Mark Scheifele notched his second goal of the season with just 12-seconds remaining in the penalty with a shot from the face-off dot to Nashville goaltender Carter Hutton‘s right.

“It definitely felt good to get it right off the start and get on the power play,” said Scheifele, now with three points on the year. “I think it’s just a matter of being dedicated to the defensive game. I think everyone has really bought-in to our system and I think that’s what has lead to a lot of our success.”

The Jets and their 28th-ranked power play (7.7%) took full advantage of Nashville’s 28-ranked penalty kill (72.7%), upping their power-play goal total to five on the season.

Blake Wheeler added an empty-netter inside the final two minutes for his fifth of the season.

Pavelec finished with 23 saves to secure his sixth win, while the Jets move up in the Central Division with 15 points, trailing St. Louis who leapfrogged the Predators with a 2-1 win in New Jersey Tuesday night to edge up to 17 points in the standings.

“A huge win after the road trip and I think we deserved to win,” said Pavelec, now 6-4-1 personally with a .924 save percentage and a 2.01 goals-against average. “I think we played really well defensively, and the special teams were great tonight. The power-play goals were huge in the first and we killed the penalties at the right time. And in the third period we played really well. It was a good game for us.”

The Jets (7-5-1) conclude their brief two-game home stand as they welcome Sidney Crosby and the Pittsburgh Penguins on Thursday night. The club then heads out on a five-game, nine-day eastern road swing through November 18.

Tuesday night was the team’s Hockey Fights Cancer Night. Through fundraising initiatives held throughout the month of October and November, the Winnipeg Jets raised and donated $58,000 to the CancerCare Manitoba Foundation. The money raised will be specifically used for CancerCare’s Pediatric Clinical Trials.