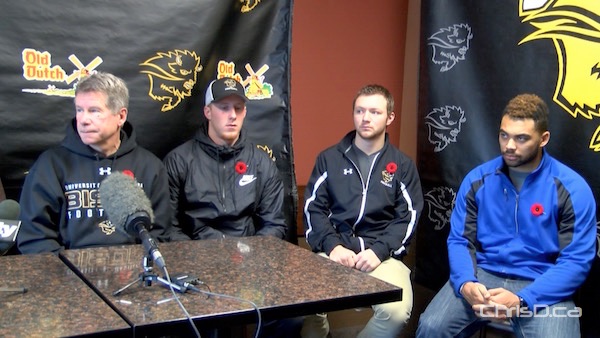 WINNIPEG — A travelling sports team usually has a host hotel to call home when playing on the road, but for the Manitoba Bisons this weekend, it’s turning into a John Candy-like travel experience.

The Bison football squad is playing their first playoff game of the season on Friday against the Saskatchewan Huskies in Saskatoon.

With no available rooms in the western city, head coach Brian Dobie and his players are having to make the roughly 90-minute trek north to Prince Albert to find accommodation.

“I’m not happy about it. You know, I get it, it’s a smaller centre,” Dobie said hesitantly when asked about the situation. “I guess I’ll leave that to the athletic directors.”

The team was to depart Winnipeg today by bus and travel about six hours before stopping in Yorkton to practice, but arrangements have since been made to fly directly to Saskatoon instead. The Bisons will practice when they land, before busing to Prince Albert to sleep.

“We’ll get up the next morning and will have to kill time because we can’t go into Saskatoon too early and walk around in shopping malls,” added Dobie. “They’ve (University of Saskatchewan) known they’re hosting a playoff game for a couple weeks. Yeah, it’s just… you know, I’m probably going into territory I shouldn’t go in to. It’s disappointing that we have to do this, but we are going to do the best we can to make the best of a disadvantaged situation.”

A large conference and ringette tournament are being blamed as reasons for the hotel shortage.

Dobie said Saskatchewan does actually have a host hotel, but arrangements weren’t made in advance to book a block of rooms for the visiting team.

The Herd has yet to win a road game this season, something Dobie hopes to turn around by defeating the Huskies.

The Bisons finished third in conference standings with a 4-4 record, while Saskatchewan (6-2) finished in second place.