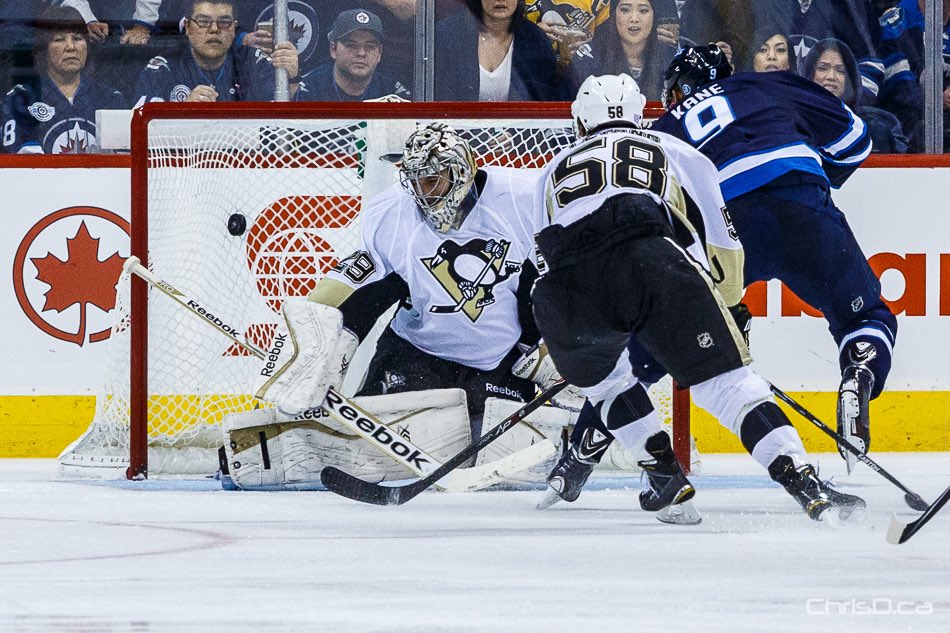 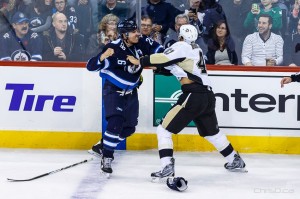 WINNIPEG — The energy and sounds were reminiscent of the 2011-2012 season at MTS Centre — a time when starved Winnipeg hockey fans rarely left their feet or the edge of their seats as their beloved Jets returned to the National Hockey League.

And Thursday night’s game against the visiting Pittsburgh Penguins most likely sent the 15,016 in attendance home satisfied, entertained, and with voices a little hoarse despite the hometown club falling 4-3 in the shootout.

It really was a heck of a hockey game — even before it went to overtime.

Evander Kane completed the ‘Gordie Howe hat trick’ with a fight, an assist, and a goal — a crowd-erupting breakaway snapshot that tied the game for Winnipeg early in the third. The 23-year-old’s first of the season is also the 100th of his career.

“It’s easy to be content with the way we’ve been playing these last few games. We’ve had some success,” said Kane of his club’s 5-0-2 run since late October. “We know Pittsburgh is a good team and obviously has some talented guys. We wanted to come out and prove we can play with the best of the best.” 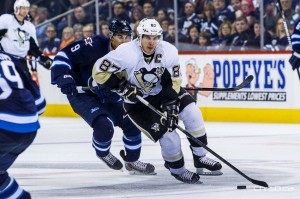 “As hard as we’ve battled the last few weeks, I think you can kind of see us starting to really bond together out there,” said Blake Wheeler. “When one guy goes down you have another guy sticking up for him. That’s how you win games in this league. That creates something special in your room that doesn’t show up outside of it.”

“We battled hard,” added Wheeler, who finished with a pair of assists in addition to his third fighting major on the young season. “It’s too bad it has to go down to a skill competition at the end with those guys. To come back from a two-goal deficit against those guys, I think we’re feeling pretty good right now.”

“I have a hard time categorizing this one as a loss. It was a pretty fun game to be a part of, and the way we battled I’m not going to look at it as a loss.”

Pittsburgh’s utterly potent power play was the main storyline entering the evening — clicking at a ridiculous 41.3 percent clip — but the Jets were able to kill all five Penguins power plays, and even survive 29 seconds of a 5-on-3 advantage against the world-class likes of Sidney Crosby and Evgeni Malkin.

Jacob Trouba scored the game’s only goal with the man-advantage, grabbing a loose puck and wiring it under the crossbar to make the game 3-2 late in the second and get back to within a goal of the Metropolitan Division-leading Penguins.

“A big goal by (Trouba) there at the end of the second period to give us a chance to win,” added Kane. “And we were able to tie it and get that point. It was tough losing in the shootout, but I thought it was a really good push-back and we fought hard to the end.”

Winnipeg now heads out on a five-game road trip, finishing up with Central Division games in Nashville and Minnesota on November 15 and 16. The Jets then begin a three-game home stand against New Jersey on Tuesday, November 18.