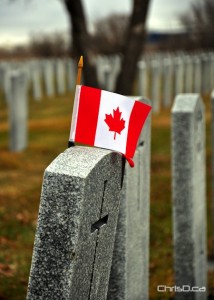 A Canadian flag rests on a headstone at Brookside Cemetery on November 11, 2010. (MARC EVANS / CHRISD.CA FILE)

The public is being invited along on a tour of the Field of Honour at Winnipeg’s Brookside Cemetery on Saturday.

In honour of Remembrance Day next Tuesday, visitors will remember the more than 11,000 war veterans interred at the cemetery, one of Canada’s largest and most significant military interment sites.

“Many people don’t know that such an important Canadian wartime historical site is located right here in Winnipeg,” said Jane Saxby, cemeteries administrator. “The Brookside Cemetery Field of Honour compares to the European and American Military Fields of Honour.”

It’s the eighth year Brookside Cemetery is providing tours, which is the final resting place for two of Manitoba’s most famous veterans, Sergeant Tommy Prince and Major Harry Coleburn.