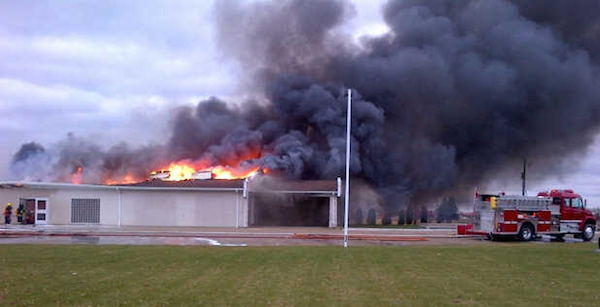 Smoke billows out from the Riverside Memorial Chapel on Friday, November 7, 2014. (RCMP HANDOUT)

A funeral home in Dauphin burst into flames Friday afternoon, completely engulfing the structure and sending thick smoke above the Manitoba community.

Firefighters and RCMP responded to the Riverside Memorial Chapel at around 2 p.m. and as of 4 p.m., the fire was still burning.

No one was inside the building at the time and no injuries were reported.

The cause of the fire remains under investigation, but flames have been controlled.

The Office of the Fire Commissioner will be attending to assist with the ongoing investigation.

My brother says something is on fire in Dauphin. Believed to be a funeral chapel in the area. pic.twitter.com/HTle6aIYiN