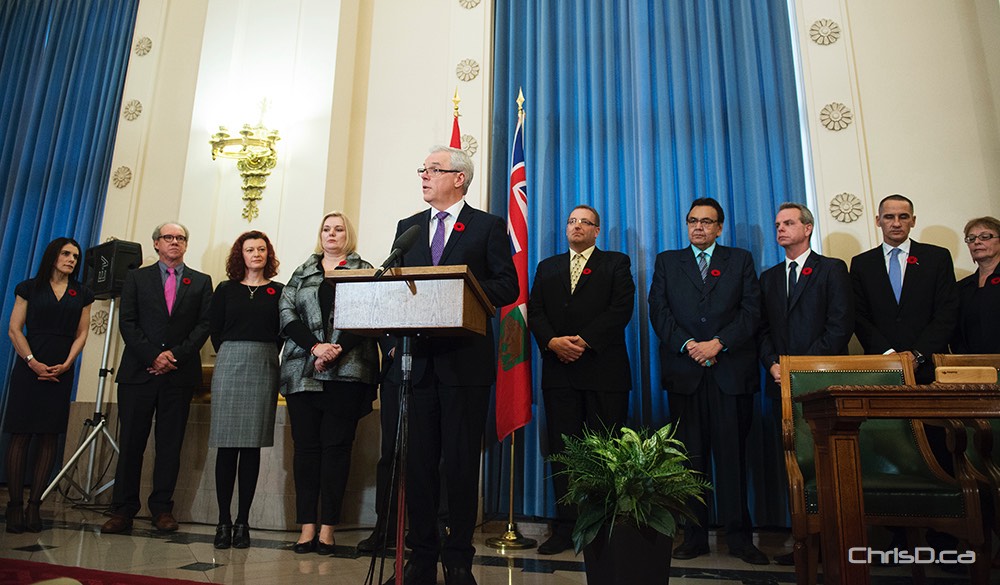 Premier Greg Selinger with the new members of his cabinet during a swearing-in ceremony on Monday, November 3, 2014. (SARAH TAYLOR / CHRISD.CA FILE)

Political parties, like most groceries, have a best before date. In Manitoba, the NDP are past theirs and local politics are really starting to smell, but voters in the Keystone province will not get a chance to do anything about it for another 18 months.

Greg Selinger, who took over as premier from Gary Doer five years ago, is now a virtual dead man walking. In a move that’s almost unheard of in the annals of politics anywhere, five of his senior cabinet ministers resigned this week after urging him to step aside so that the party could choose someone new at the top.

Their portfolios were quickly filled, and Selinger is stubbornly determined to carry on as if things were normal. There does not appear to be any upside for the premier, and he is certain to face a leadership review no later than six months from now. By the time the next Manitoba election is held, the New Democrats will have been in power almost 17 years. That’s even longer than the NDP held sway in Saskatchewan before Brad Wall took over in 2007.

With all due respect to Conservative leader Brian Pallister, there is no Brad Wall waiting in the wings in Manitoba. Is there’s any chance the NDP might rise from the ashes like the mythical Phoenix? I see one slim and rather bizarre possibility, and I’m somewhat surprised that almost no one else has mentioned it.

How about bringing back Gary Doer, one of the most successful politicians in Canada’s recent history? He is just about done as Stephen Harper’s man in Washington, and when that next election is held, Doer will be a relatively young 67.

Would this be the ultimate Hail Mary pass in the world of politics? Definitely, but these are desperate times for the party which has governed Manitoba for all but 15 of the past 45 years. Stay tuned.