Police Seek Anyone in Contact with Teen Girl Prior to Assault 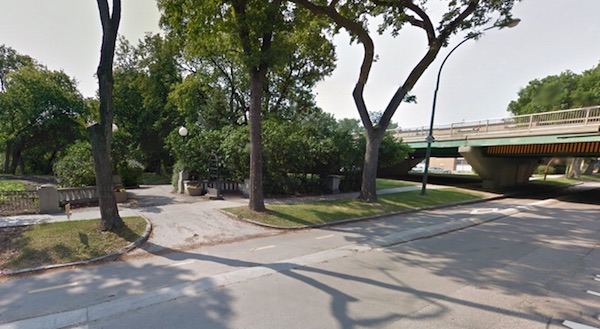 The entrance to the river walk near east of the Midtown Bridge where a teen girl was assaulted on Saturday, November 8, 2014. (GOOGLE STREET VIEW)

Winnipeg police are looking for anyone who may have had contact with a 16-year-old before she was seriously assaulted on Saturday morning.

The teen was found in the area of Donald Street and Assiniboine Avenue, near the river walk east of the Midtown Bridge at around 7 a.m.

She was taken to hospital in unstable condition, where she is currently recovering.

The victim is described as aboriginal in appearance, 5’4″ tall, 180 lbs with dark brown hair past the shoulders. She was wearing black leggings, white runners, dark coloured North Face hooded jacket and a black “WUTANG” hoody. She was last seen in the area of the Midtown Bridge and Donald Street, at the rear of 340 Assiniboine Avenue heading towards the river walk.